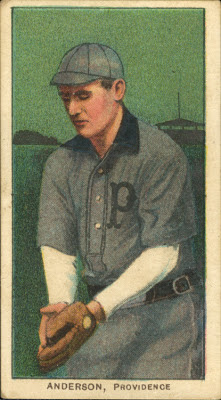 The Aug. 3, 1949, issue of The Sporting News was awash with news, photos and commentary of a “bonehead” play by Larry Doby that may have cost the Cleveland Indians the July 20 game against the Yankees.

Unbidden by his manager or third base coach, Doby attempted to steal home plate with his team down four runs, the bases loaded, nobody out and pitcher Joe Page getting wild with two balls on the batter, Bob Kennedy. Doby was fined $50 for his initiative.

Coincidentally, towards the back of that issue, appeared the obituary of John Anderson, who had died July 23 at the age of 75.

Because he rarely argued with umpires he was known as “Honest John.” One contemporary umpire said could make an umpire second-guess his calls.  “Whenever ‘Honest John’ protested a strike, an umpire later would remark: ‘Maybe I missed that strike, for John wouldn’t have protested otherwise.’”

was born in and emigrated to , with his parents in 1878. He became the first major league player to have born in Norway.

He played his first pro ball with of the New England League in 1894 and was batting .354 when he was purchased by of the National League and finished the season with them.

played with Brooklyn, mostly at first base, until he was sold to in the American League for 1900. He moved with the franchise to in 1902. In 1904 he joined the New York Highlanders, played with 1905-07, then ended his major league days with the White Sox in 1908.

In 1909 he played for of the Eastern League, then retired.

After spending five years as a policeman in , he became a coach for Buffalo in the International League.

had earned a spot on what a TSN editor in Doby’s case had dubbed the “Rockhead Roll of Fame,” by attempting to steal second base while the bases were loaded. That came in a 1905 game when he was with the Senators.
Posted by Bob Lemke at 2:17 PM