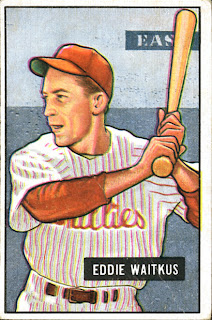 The shooting of Roy Hobbs in a hotel room by a female fan is a key plot point in The Natural.
Many fans of post-war baseball know the incident had a real-life precedent when, on June 14, 1948, Philadelphia Phillies first baseman Eddie Waitkus was seriously wounded by a “deranged girl” (it says so on the back of his 1955 Bowman card) in a Chicago hotel room.
Waitkus recovered and was able to resume his major league career the following year.
Few fans, however, know that Waitkus won a worker’s compensation claim for the shooting.
Waitkus, seeking $4,000 and medical expenses, claimed that when he answered the shooter’s cryptic note to meet her in her hotel room, he was acting in the interests of Phillies public relations.
If that was the case, the Phillies’ insurer, Travelers Insurance Company, countered, then Waitkus was in violation of his contract, which called for him to have the team’s permission to make personal appearances for the club.
The Pennsylvania State Workmen’s Compensation Bureau ruled in the player’s favor on March 9, 1949, awarding Waitkus $3,500 and his medical expenses.


I saw a note in a later edition of the paper that indicated that the Hall of Fame asked Waitkus for the near-fatal bullet. I didn’t find any record of whether the museum received the bullet. 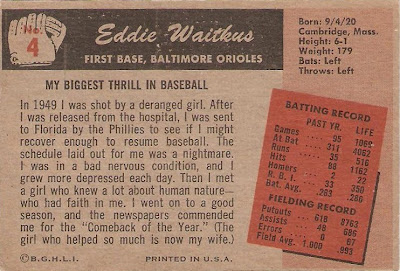