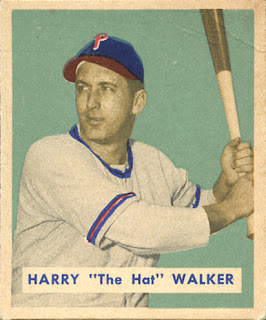 I’m not sure what the current major league record is for number of balls fouled off in an at bat . . . if that’s even an official stat.

The Reds were ahead 9-2 in the seventh inning, when “The Hat” stepped to the plate. At the time he was batting .261.

After letting a low pitch pass for ball one, Walker fouled off the next two pitches, before looking at a high pitch that was ball two.

He fouled off two more, then stepped back from ball three, a high inside pitch. He then fouled off nine straight pitches before smashing a double high off the screen in right-center field. It was reported that some of Walker’s fouls were hard-hit balls.

Later in the game rookie Lloyd Merriman was brought in to replace Walker in centerfield. The Reds beat the Cards 10-2.

The at-bat might not have taken so long if had not, after every pitch, stepped out of the box, taken off his cap, smoothed back his hair and replaced his cap, according to a contemporary account.

Maybe that's how he got his nickname.
Posted by Bob Lemke at 9:47 AM