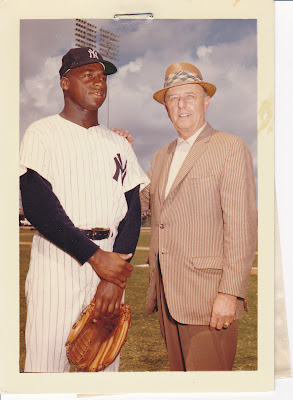 From the late 1950s through the early 1980s,
Detroit-area photographer J.D. McCarthy (right)
created images of more than a thousand ballplayers for their
use on postcards to answer fan mail. He's shown
here at spring training in the 1960s with Al Downing.

I keep pulling boxes out of the basement (some of which haven't been opened for 20 years or more), sorting through them -- which is a lot of fun in itself -- selling off what I think has value and throwing out what the realities of today's hobby market now deem worthless.

At the pace I'm going, I really think my "stuff" will outlive me.

So it makes no sense that I recently made a major addition to my holdings.

Followers of this blog know that one of my principal activities in retirement is the making of "cards that never were," custom or fantasy cards in the formats of the classic baseball and football cards I loved as a kid.

Two of my recent creations were 1965 and 1966 Topps-style cards of ill-fated California Angels pitcher Dick Wantz (see my blog from April 24 and May 2). The photo for those cards came through the courtesy of Keith Olbermann, who has a private stash of vintage Topps photos.

Many of my other custom cards use photos that I've purchased or "borrowed" from the Topps Vault auctions that have been ongoing on eBay for a number of years.

One day it occurred to me that Topps wasn't the only source for vintage baseball players photos.

I remembered that back in the late 1980s or early 1990s, I engineered the purchase by Krause Publications of a huge portion of the photo files of J.D. McCarthy of Oak Park, Mich.

Following McCarthy's death, a collecting colleague from the Detroit area, Red Wimmer, approached me on behalf of McCarthy's family, offering to sell the pictures.

From the late-1950s through at least the early 1980s, McCarthy was one of the premier providers of photos and postcards to baseball (and to a much lesser degree, football and hockey) players for their use in answering fan requests for pictures and autographs.

By the time McCarthy's archives were offered to me, they had been cherry-picked by several collectors. Most of the Hall of Famers and regionally popular stars were gone, and certain teams had been pulled en masse. For instance, in the material we purchased there are virtually no Detroit Tigers, Minnesota Twins, San Francisco Giants, St. Louis Cardinals or Milwaukee/Atlanta Braves.

I don't remember how much we paid for what we bought, but back when the sportscard hobby was in its heyday, money was no object at Krause. I thought we'd get a lot of use out of the pictures in articles in SCD and the other magazines.

I was wrong. I don't think the files in which the pictures were housed were accessed more than a dozen times in the 20+ years we had them.

Whatever KP paid for the resource, I paid a whole lot less when I purchased them earlier this summer. I made an admittedly lowball offer based on my recollection of the hoard. I figured there'd be a lot of great photos there that I could use in making my custom cards.

It turns out that on a per piece basis, I made a really great deal. In the back of my mind I was thinking that there was about 400 different players represented. I was way off. I'm only done cataloging the collection alphabetically from A-F and I'm already up to 225+ players.

And I had forgotten that for more than half of the players, there are more than one image -- there's frequently three to five different poses and sometimes as many as a dozen.

At the time KP bought the pictures, an editorial assistant placed each player's images in an envelope with his name and team or teams noted.

A typical player's envelope will contain one or more black-and-white and/or color 2" x 2" negatives and an accompanying photo print or proof. As you can see from the picture here of the contents of Ernie Fazio's envelope, many of the pictures have notations penned on them indicating picture or postcard ordering information. A few envelopes have examples of the postcards that McCarthy produced from his photos. 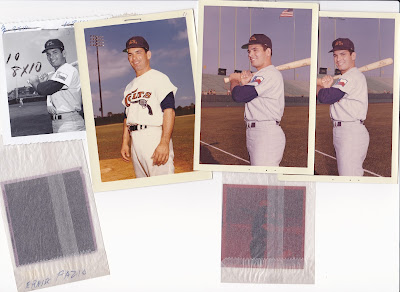 One of the principal reason I wanted to acquire the pictures is that McCarthy had hundreds of photos of players in major league uniforms that never actually played in the bigs. Many of his photos were shot at spring training when prospects were up with the big club before being returned to the minors or hanging up their spikes. Evidently these players felt that having McCarthy take their pictures was a sign that they were on their way to a major league career.

Naturally, given the era in which McCarthy accomplished the bulk of his work, many of these players never had a baseball card. In some cases I plan to remedy that with a fantasy card that is my vision for what their cards might have looked like.

I'm having a ball going through this baseball history trove. I'm creating a spread sheet with each player, his team, the probably year the image was taken and whether the pictures are color or black-and-white.

When that work is done, and I've finished scanning those images that I have a reasonable expectation of someday using in my custom card work, I'll sell my McCarthy holdings.

Throughout the process, I expect I'll take the opportunity to share with you some of what I find.