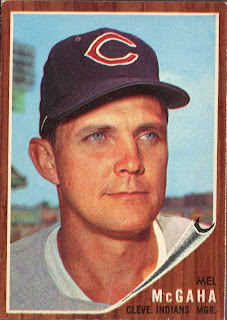 On the morning of July 24, 1948, a bus filled with the Duluth Dukes, the Class C Northern League farm team of the St. Louis Louis Cardinals was hit head-on by a truck which had crossed over the center line on a bad stretch of U.S. Highway 36 near St. Paul, Minn.

The bus rolled and burst into flames. Six people died, including Dukes manager George Treadwell, who had been driving the bus, four of his players and the truck driver. The team had been traveling from Eau Claire, Wis., to St. Cloud, Minn., for a game.

All of the players on the bus suffered  injuries ranging from severe burns, broken bones and internal injuries to those seated near the front, to bruises and/or minor burns to those in the back.

Among the fortunate survivors was the team's 21-year-old first baseman Mel McGaha (muh-GAY-uh). Seated in back, he received only minor injuries.

McGaha was only person on the bus to reach the major leagues.

A few of his teammates had their professional careers ended that day, several others worked their way through the minors' ranks but fell short of making "the show."

The Dukes resumed their schedule a week after the accident; their roster repopulated with players from other St. Louis farm teams and on loan from other Northern League teams.

McGaha never played in the major leagues, but had three seasons as an American League manager and six years as a coach at the highest level. 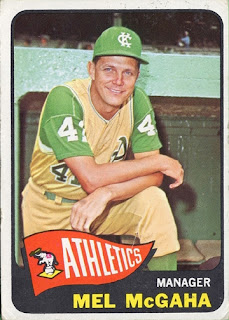 Following the wreck, he continued in the Cardinals' organization through the 1952 season, rising as high as the AAA level. He then played five years with Shreveport, an independent team in the Texas League; he was a playing manager from 1954-57.

He had a similar post in the Cleveland organization with Mobile (AA) of the Southern Association in 1958, stayed on as manager in 1959, and moved up to manage the Indians' AAA affiliate, the Toronto Maple Leafs, in 1960.

He appeared on a pair of Topps cards, as Indians manager in the 1962 set, and A's skipper in 1965. Neither of those cards mentions the bus accident in the biography on back.

McGaha had another baseball card, a real rarity, as manager of the Maple Leafs in the 1960 Shopsy's Frankfurters team set.
Posted by Bob Lemke at 10:37 AM