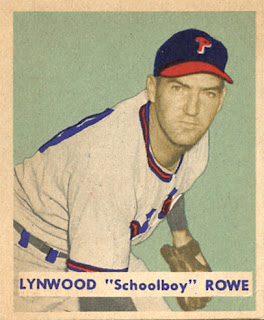 While poring over some 1949 microfilm of The Sporting News recently my eye was captured by a photo of a player swinging a bat one-handed. Used to seeing such photos of wartime one-armed outfielder Pete Gray, I was surprised to read the story of a veteran pitcher who was forced by injury to take his cuts one-handed for a period.

For a brief period in 1948, Rowe did considerably better than that – one hundred points higher, in fact – batting one-handed.

On May 5, the Phillies’ pitcher had the thumb of his left hand broken by a line drive from the bat of the Cubs’ Peanuts Lowrey.

While the thumb and wrist were put in a cast, the injury didn’t keep Rowe off the mound.

On May 25, Rowe was called in to relieve against the Pirates. He came up to bat in the eighth inning against Elmer Riddle.

According to The Sporting News’ Philadelphia correspondent Stan Baumgartner, “The fans, laughing when he first swung the bat with one hand, stared in amazement when he socked the second pitch over Stan Rojek’s head at short for a clean single.”

On June 5, Rowe started against the Cubs, who had Cliff Chambers on the mound.

In his first at-bat, Rowe drove a line single past Eddie Waitkus at first. He hit safely to left on his second trip. In his third time at bat he laid down a bunt and on his fourth trip to the plate he smashed a line drive to center but was robbed of a hit when Hal Jeffcoat made a shoestring catch. Rowe got the complete game win.

“It’s just like I always thought,” Rowe was quoted, “I can hit most of these cunny thumb pitchers with one hand tied behind my back.”

According to the TSN report, during the period in which Rowe wore the cast, he didn’t wear a glove on his left hand. He protected the thumb by taping a ten-penny spike to the cast and was able to knock down even hard-hit grounders and throw the batter out at first.

During the period in which Rowe was forced to bat one-handed, as near as I can determine from the stats, he was 4-for-11, batting .364.