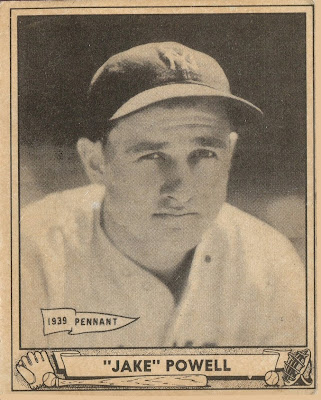 Alvin “Jake” Powell was a professional ballplayer for two decades (1930-43, 1948), 11 years of that span as a major leaguer. He seems to have carved out that career through gritty, determined play, rather than natural skills.

Off and on during his time as a ballplayer he was a hero to Yankees fans, making timely hits or brilliant plays in the outfield to help capture a pennant or win a World Series.

At other times he was among the most hated players of the day.

Much of the rancor against Powell, especially outside of the baseball world, stemmed from a racist remark he made during a radio interview.

After he had taken batting practice before the July 29, 1938, game at Comiskey Park, Powell was approached in the dugout by Bob Elson of WGN radio and asked to do an interview.

Because the live pre-game show was apparently never recorded, 75 years later it appears Powell’s actual words have been lost to time. Accounts of the incident disagree on the specifics.

Elson is said to have asked the Yankees outfielder what he did in the off-season. Powell was quoted by some sources as replying “I’m a cop, in Dayton, Ohio, during the winter.” Most accounts indicate Elson, in a follow-up question, asked Powell what he did on the police force. While his exact reply may be the subject of conjecture, the gist of it is not.

Dan Daniels, a newspaperman who covered the Yankees for The Sporting News, reported in a front page story of the Aug. 4 issue that Powell said, “I crack niggers on the head.” Ten years later, when revisiting the incident in coverage of Powell’s suicide, TSN quoted Powell as saying, “I spend the off-season clubbing niggers over the head.”

Daniel reported that the radio station immediately cut away from the program and began issuing a series of on-air apologies in an effort to stem the flood of telephoned protests.
When Powell was informed of the furor he had caused, Daniel said the player “expressed regret and asked permission to go on the air to apologize.” It does not appear he was given that opportunity.

Daniel’s article summarized Powell’s “defense” as that “he merely intimated he worked in a neighborhood entirely Negro in population, that he found some of the population tough to handle and, as cops will, had to use his billy.”

On its editorial page on the same issue, TSN espoused this position: “Powell was on the spot and was a victim of circumstances, which should not be held against him by the fans. Other players, in other instances, might offend other groups.

“The remedy, as we see it, is to relieve the players of such assignments. Put them on the radio, assuredly, but under more propitious conditions, where they can do themselves and the game justice, without being forced to run the gauntlet of questions to which they cannot give some thought, and commit further indiscretions, unconsciously.”

Yankees manager Joe McCarthy, Daniel said, “rushed to the defense of Powell and criticized radio stations for bothering players while they were on duty.” McCarthy immediately ordered his players not to go on the air in similar impromptu situations.

Baseball commissioner Kenesaw M. Landis, who was ironically an ardent segregationist, suspended Powell for 10 days, until the Yankees returned from their road trip. There were rumors that he would seek a prohibition against players granting dugout or on-field interviews, or indeed any unscripted broadcasts.

A scholarly review of media coverage of Powell’s radio gaffe, especially in comparing white and black media, was presented in a paper at the 1997 Cooperstown Symposium on Baseball and American Culture. An anthology of 14 papers presented in that forum was published and lengthy excerpts can be found on the internet.

An interesting sidebar revealed in that paper is that the very few media outlets (all black) that contacted the Dayton police department for comment found that Powell was never employed by that department. Reports disagree as to whether Powell had applied for a job and was turned down, or was offered a job and turned it down to concentrate on baseball.

In December, 1942, The Sporting News reported that Powell, then working an off-season job as a security guard at the Aeroproducts war plant in Dayton, had passed a civil service exam for the Dayton police department, and been placed on a waiting list.

According to the obituary in the Nov. 10, 1948, issue of The Sporting News, Powell’s suicide on Nov. 4, “brought to a close one of the most exciting and tempestuous baseball careers on record. Jake always played the game ‘for keeps’ and often battled for his base hits with his fists or his spikes.”

Among Powell most famous on-field encounters . . .

After he had been traded from the Senators to the Yankees, Powell had a literal run-in with former teammate Joe Kuhel, slamming into the Senators’ first baseman while trying to beat out a single. He exchanged punches with Kuhel, then with several other Senators who leaped off the bench to get in their licks.

When he took his place in left field, Powell was showered with bottles from angry bleacherites. Powell waved off the groundskeepers, picked up the bottles and fired them back at the fans.

A similar play in a game on April 29, 1936, had a devastating effect on Hank Greenberg. The Tigers’ first baseman was waiting for the throw on a “routine play,” when Powell, charging down the first base line, crashed into Greenberg’s outstretched arm, breaking his wrist and putting him out of action for the remainder of the season. Baseball writers of the time didn’t seem so exercised at Powell’s hard-nosed play as by the fact that he never apologized to Greenberg for the collision. He was nothing to apologize for; he had beaten out a base hit.

One of Powell’s epic battles was with Boston player-manager Joe Cronin on Decoration Day, 1938. Red Sox pitcher Archie McKain hit Powell on the knee with a pitch, after twice knocking him down with brush back throws. Powell charged the mound and was intercepted by Cronin. Fists flew around the mound. After both had been ejected, they continued their altercation under the stands.

Powell returned to the Senators in mid-August, 1943, having spent the 1941, 1942 and the first half of 1943 seasons relegated to the minor leagues. When he entered the clubhouse the other players knew that his time in the minors hadn’t mellowed him. He sported a huge black eye, the result of a farewell fist fight with Indianapolis second baseman Eric McNair in his final game with St. Paul.