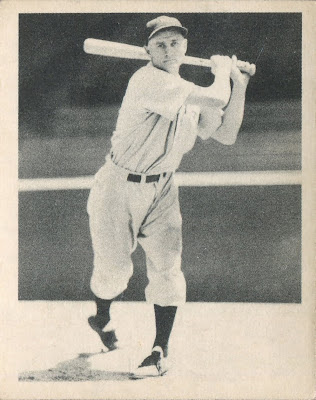 Jake Powell remained in the majors through the 1945 season, but with World War II ended and hundreds of ballplayers returning to diamond action, Powell could find no team willing to take him on for 1946. He tried a brief comeback in 1948 with Gainesville in the Class D Florida State League, but lasted only 30 games.

A few months after he had left pro ball, Powell was in Washington, D.C., on Nov. 4, 1948. After writing bad checks totaling $300 at the hotel where he was staying, and at least one other for $25 at a local drug store, Powell was arrested as he tried to leave town. The hotel clerk had become suspicious, and telephoned the Dayton, Ohio, bank on which the checks had been drawn. When he was informed Powell had no account there, the clerk chased the former ballplayer down at Union Station, where he was about to board a train with a young woman who claimed the pair was planning to be married later that day. (Powell was reportedly still married to wife Elizabeth at the time.)

The pair was taken to a metro police station. When Powell was granted permission to have a private conversation with his companion he produced a .25 caliber automatic pistol. Shouting, “Hell, I’m going to end it all,” he shot himself in the left side of his chest. The wound from the tiny pistol didn’t kill Powell, so he shot himself again, in the right temple. He was dead when an ambulance arrived 10 minutes later. The same gritty determination that marked Powell’s baseball play was evident in the manner of his suicide.

A week after running his obituary, TSN printed a full-page retrospective of Powell, the man and the ballplayer.

One of the pieces was a reprint of a Shirley Povich column from the Washington Post that had run the previous August, upon Powell’s release by Gainesville.

Povich described Powell as, “problem boy of the Nats, World’s Series hero with the Yankees, ruthless on the baselines, vague about train schedules and contemptuous of the outfield fences.”

The column recounted the story of Powell’s ill-advised interview, though Povich substituted the word “citizens” for “niggers” (a nicety that The Sporting News usually adhered to in subsequent articles).

The Povich piece concluded with this assessment “Powell belonged to a by-gone era of baseball. He was of a piece with the rough-and-ready, rootin’ tootin’ element that never did trifle much with the niceties of competition. Jake was not particular about how he tried to win games. There was just one big idea with him—winning. With Jake, winning justified all the tactics.”

Shortly after the radio faux pas Povich had commented to the effect that if Powell was no more effective with a nightstick than he was with a baseball bat, the “citizens” of Dayton had little to fear.

On that same page of the Nov. 17 TSN, was a column by Vincent X. Flaherty, then of the Los Angeles Examiner, who had known Powell since his days on the sandlots of Washington, D.C.

Flaherty wrote, “I remember Powell as a helter-skelter, slam-bang athlete who made up for lack of size with aggressiveness. In baseball he was always tough. Away from the game he was a nice quiet boy who seemed skeptical of those who slapped him on his back and told him he was a great ball player.

“Jake was never a bad kid,” Flaherty continued, “I’ll never believe he was a bad man. He was impetuous, had a fierce uncontrollable temper, would fight the biggest guy around at a drop of a hat.”

Flaherty then told a tale of how hours after receiving one of his World’s Series winner’s share checks, Powell had dropped the entire $7,000 throwing dice and buying liquor for the house at an underground gambling establishment.

The third piece on that page was by Red Smith, of the N.Y. Herald Tribune. He wrote that a lot of stories could be told about Jake Powell, but that he would tell only one, “which may explain a couple of things. That is, it may furnish a little insight into the nature of a guy who never knew fear and never knew what was good for him, a guy who often acted on impulse and was wrong more often than not.”

Smith prefaced his tale by summarizing Powell’s infamous interview as including “a thoughtless remark that offended thousands of Negroes.”

He wrote, “A storm ensued. The American League office in Chicago was flooded with protests. There was talk of a boycott against any park where Powell might be playing. Jake was as wrong as wrong could be.

“Well, the next time Powell got to New York he went up to the top end of Harlem. He went alone, after dark. He worked down from north to south, stopping in every saloon he came across.

“He did that by himself, on his own initiative, after dark, in a section where he had reason to believe feeling ran high against him. That’s one story about Jake Powell. The only story here.”

Since most of Jake Powell’s career was concurrent with the lean years of baseball card issues, he did not leave much of a cardboard legacy. Among mainstream issues, he is only found in the Play Ball sets of 1939 and 1940.
Posted by Bob Lemke at 4:10 PM