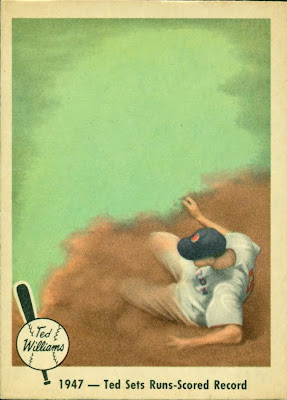 Certainly a contender for the "honor" of being the ugliest baseball card of all time is #34 in the 1959 Fleer "Baseball's Greatest" Ted Williams set.

Williams had doubled down the right field foul line off Harry Brecheen in the top of the fourth inning. While he advanced to third base on Lou Boudreau's single, he was stranded there. The American League went on to win the game 2-1.

Presumably Fleer was forced to obscure Marion's image because Topps held the baseball-card rights to his image in 1959. If that was the case, they would have obtained the rights with their 1955 purchase of Bowman. Marion never appeared on a Topps card in that era, having been on Bowman cards each year 1948-53.

By the time the 1960 and 1961 Fleer Baseball Greats were issued, however, Fleer evidently had obtained the rights; Marion appears in both those sets in a White Sox uniform from his days (1954-56) managing Chicago. 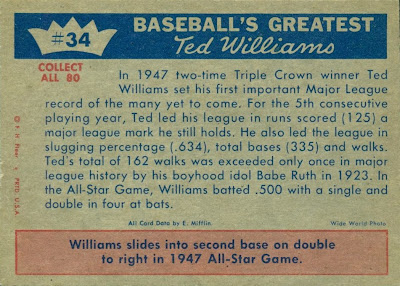 We've arguably looked at the ugliest Ted Williams card of all time. Next time I'll show you what I hope you'll think is a pretty good-looking Ted Williams card . . . my 1960 Topps-style TW custom.
Posted by Bob Lemke at 1:25 PM