In reading back issues of the 1947 Sporting News, I ran across many stories about Trippi, particularly concerning the summer he spent in pro baseball before starting his Hall of Fame NFL career in 1947.

I was surprised to realize that I have never considered adding a Charley Trippi  college card to my update set of 1955 Topps All-American style custom cards. That omission has now been rectified.

Trippi did well in professional baseball as a "summer job".

After he'd indicated an interest in pro ball, Trippi was approached by a number of major league teams. Some of the bonus offers made were substantial, but all fell through when Trippi would not forego the idea of joining the NFL Chicago Cardinals in the fall. By the way, that's not a typo on the back of my card, Trippi was drafted by the Cardinals in the 1945 NFL draft; they had some sort of "futures" option in the draft back then.

In 1947 he signed to play baseball for the Atlanta Crackers of the Southern Association, being both a legitimate prospect -- he had been an All-American in 1946 and hit over .400 for the Bulldogs -- and a fan-favorite gate attraction.

Trippi played at first base and in the outfield. In 106 games (about 2/3 of the season) he led the team with a .334 batting average, though without much power, hitting only three home runs. He slugged a tripe in his final game for Atlanta, Aug. 13.

Trippi must have reported to his first Cardinals training camp tired. After playing nearly every minute of Georgia's 11-0-0 season he 1946, he went barnstorming with the Bulldogs' basketball team, then stepped onto the diamond with Atlanta.

He began his NFL career with the Chicago Cardinals in 1947, having signed a four-year $100,000 contract.

Trippi was provisionally sold to the Chicago White Sox for 1948, but when the team demanded he quit playing pro football, he opted for the gridiron career. 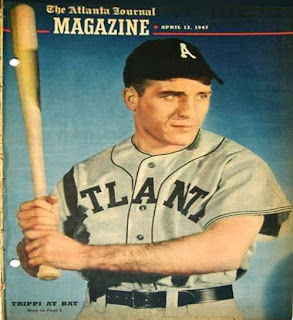 That magazine picture would allow for the creation of a custom baseball card, if a person was so inclined.


Trippi, by the way, is fast approaching his 91st birthday. 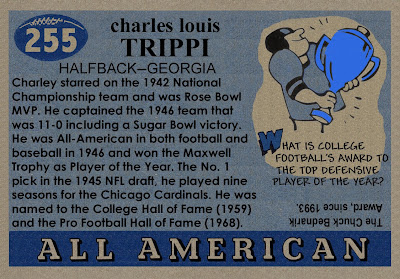