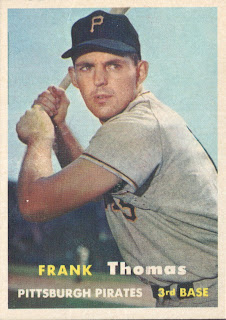 On Oct. 26, I presented the story of a baseball “dirty trick” that cost a player a base hit.

Here’s the story of an old baseball chestnut that didn’t fool its intended victim.

In the fifth inning of the first game of an April 21, 1957, Sunday doubleheader at , Pittsburgh Pirates outfielder Frank Thomas had reached third on an error, a sacrifice bunt and a fielder’s choice. 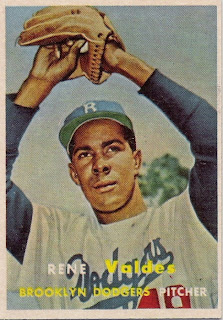 Twenty-eight-year-old rookie Rene Valdes was on the mound in his first major league appearance. Valdes had come on in the third inning after starter Don Newcombe gave up back-to-back-to-back home runs to Thomas, Paul Smith and Dick Groat.

As he stood on third in the fifth inning with two out, Thomas yelled to Valdes that he wanted to inspect the ball.

If Valdes had tossed the ball to Thomas, the Pirates base runner would have stepped aside and let it roll to the stands, trotting home for a run.

Valdes did toss the ball to Thomas . . . but called “time” first. He had seen that trick before while pitching in the minors. Thomas was left stranded at third, though the Pirates went on to win the game 6-3.
Posted by Bob Lemke at 2:18 PM