I presented groupings of similar photos almost exactly a year ago, in my blog of 9/9/11, and other groupings on Sept. 10, Oct. 2,  6, 16 and 28 of this year. This presentation contains some of a large grouping of similarly themed press photos that were collected over the years by former colleague Tom Mortenson, who was a long-time editor of Sports Collectors Digest.

All of the photos this time are of Eddie Mathews and the women in his life. Mort had  more than a passing acquaintance with Mathews, and so was able to offer a bit of insight on some of the photos. 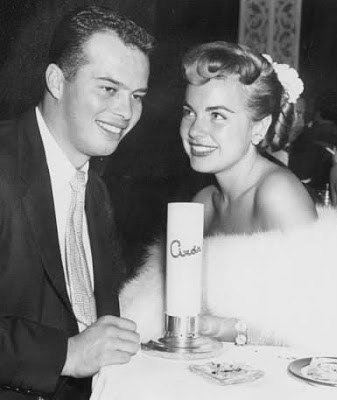 One of the first women to be publicly linked to Eddie Mathews was actress Terry Moore. This photo of the couple canoodling is believed to have been taken after the end of Mathews' rookie season with the Boston Braves in 1952.  That was the year Moore filmed Come Back Little Sheba, for which she received an Academy Award nomination for best supporting actress.

Moore lived with billionaire Howard Hughes in the 1940s and claimed to have been married to him in 1949. While she could produce no evidence of such a marriage, Hughes' estate settled with her in 1984. That same year she posed in the August issue of Playboy at the age of 55.
In 1951, she married former Army All-American halfback Glenn Davis. Moore was the cover girl for the July 6, 1953, issue of Life magazine, tabbed as "Hollywood's Sexy Tomboy." 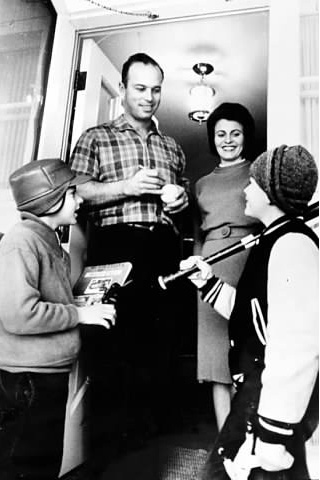 This is a photo, circa 1955, of Mathews with his first wife, Virjean Lauby, greeting a couple of neighborhood boys at their suburban Milwaukee home. She was from Marshfield, Wis., where her father was a doctor at the famed Marshfied Clinic.

The couple was married in a civil ceremony in 1954. They divorced in 1970. According to Mort, at the 1955 All-Star Game in Milwaukee, Stan Musial gave Mathews an autographed bat. He stored the bat, and several of his own, in the attic of their home. When he and Virjean divorced he went to retrieve the bats and she refused to hand them over. He said he didn't care about his own bats, "She can stick them where the sun don't shine," he is reported to have said, "But she wouldn't let me have that damn Stan Musial bat. That's the only one I wanted." 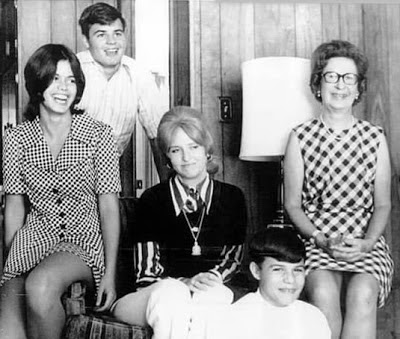 Mathews was married briefly to his second wife, Sue Ann, in 1972. She's shown at center in this photo with Mathews' children by his first marriage, Stephanie (then 15), Eddie Jr. (17) and John (12). Eddie's mother Eloise is at right. 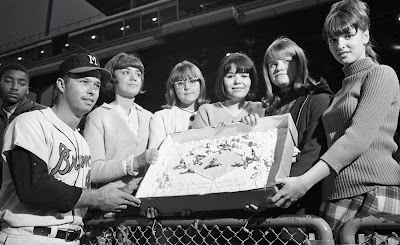 Because he was young, handsome and by the standards of the day, rich, Mathews attracted lots of attention from adoring females. This undated photo (1963-65 according to the uniform) shows a group of high school girls presenting Mathews with a cake at County Stadium.

It's probably not a birthday cake, notes Mortenson, because Mathews' birthday was Oct. 13. 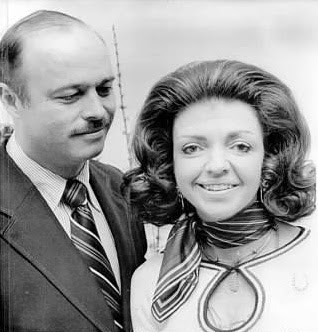 In 1977, Mathews was married for a third time, to Elizabeth Busch-Burke. She was the daughter of August Busch, Jr., owner of the Anheuser-Busch brewery. The couple also divorced.

Mathews was married a fourth time, to Judy, who was at his side when he died in 2001.