Washington Senators or Nationals? Depends when 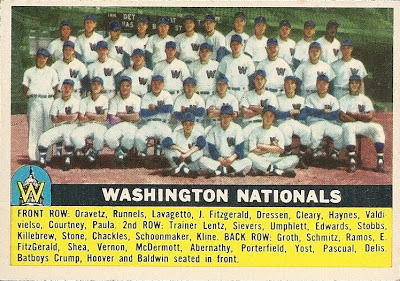 Collectors are occasionally confused by Topps cards of 1955 and 1956 that identify players as "Washington Nationals."

Ever since a fan contest in 1905, the official nickname of the Washington American League team was the Nationals. The team had been known as the Senators since 1886 (Statesmen before that), but the 1905 vote never really caught on.

I'm unsure why the team made a renewed drive to emphasize the Nationals nickname in the mid-1950s. Perhaps it had something to do with the fact that National Bohemian brand beer was the team's radio-TV sponsor.

Topps was alone in the card world in trying to revive the Nationals nickname. Bowman identified all Washington players as Senators right up until they ceased production in 1955. Red Man also used Senators in its 1952-55 sets. Briggs Meats, which had a lot of Washington players in its regional card sets of 1953-1954 avoided the issue by not using either name.

Because Washington was in the National League when the city reacquired major league baseball in 2005, it was natural that they adopted the Nationals nickname.
Posted by Bob Lemke at 11:44 AM