Writing in The Sporting News of Feb. 27, 1957, Russ Schneider of described her as “a burlesque queen with considerable – and well-tailored talent.

“Miss Waggin has wiggled her 36-23-35 shape through burlesque’s big leagues for three years and was recently included on a list of the top ten strippers in the country.”

Rudolph met his future wife in 1954 when he was playing for where she was dancing. They were married in 1955. Patti, whose real name was Patricia Artae Hardwick was five years older than Rudolph; her marriage to the ballplayer was her third.

Patti was often billed as “The co-ed with the educated torso.” She got her start in burlesque while a student at Chico State College in California. Her grandmother and mother were both in vaudeville, the former dancing under the name Maude Hillyer, the latter as Dale Adams.
Rudolph spent the off-seasons traveling with her as manager, publicity man and what Schneider called “clothes catcher.” Schneider said, “During performances, Rudolph stands in the wings and catches her clothes after she steps out of them on the stage.”

The writer described Waggin as a “charming brunette who apparently knows baseball as well as bumps and grinds.”

The article included the expected Fifties expressions of the wifely duty to put her husband’s career ahead of her own professional ambitions. “I plan to continue my career indefinitely,” she was quoted, “But Don’s comes first. If I thought I was jeopardizing his chances in the least, I’d quit right away.” She did eventually leave the stage around 1960.

Rudolph won 13 games in his first pro season, at the age of 18 at Jesup (Class D, Georgia State League). Remaining with Jesup in 1951, Rudolph was the winningest pitcher in Organized Baseball with a 28-8 record and 2.91 ERA. He walked only 52 batters in 223 innings, and nine of them were intentional. 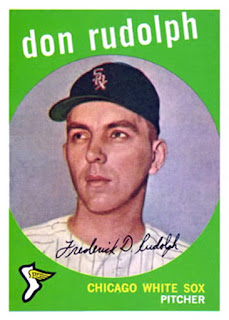 Chicago traded Rudolph to the Cincinnati Reds on May 1, 1959, and although he remained in the Reds' system through the 1961 season, he pitched in only 7.1 innings at the big league level.

The Indians claimed Rudolph in the 1961 Rule 5 draft, but he faced only one batter with the Tribe before being traded to Washington on May 3, 1962.

Rudolph played for the Senators until the end of 1964, then ended his pro ball career after two more years in the high minors. As a major league pitcher, Don Rudolph had an 18-32 record with an ERA of 4.00.

He was killed in a traffic accident in 1968. Patti never remarried and died in 1992.

By all accounts, the couple was well-liked in both the burlesque and professional baseball worlds.

Bob Brill, who wrote for us at Sports Collectors Digest years ago, is perhaps Patti's biggest fan. He maintains a website devoted to Patti and Don. You can read a lot more about the couple there at: www.pattiwagin.com .

Once when he was asked if he wasn’t afraid that his wife’s vocation would provide too much ammunition for opposing bench jockeys, Rudolph merely grinned.

“‘At first it bothered me, but not anymore,’ he said. ‘When it gets too rough, a high hard one under the chin usually shuts them up pretty good.’”