Hard luck for Ferrarese to start May, 1956 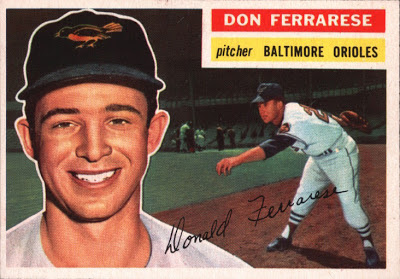 Orioles 27-year-old rookie left-hander Don Ferrarese suffered some hard luck to start the month of May, 1956.

In his first major league start on May 5 he struck out 13 batters but Jim Hegan’s ninth inning double gave the Indians a 2-1 win.

A week later he beat the Yankees 1-0 for his first major league victory, but missed out on a no-hitter when Andy Carey, batting eighth, led off the bottom of the ninth inning with a hard chop off home plate. While Ferrarese backed up toward second and waited – and waited and waited – for the ball to come down, Carey had crossed first base. Ferrarese then allowed a hit to Hank Bauer, but closed out the Yankees and beat Bob Turley.

Across the river that afternoon, Carl Erskine was pitching a no-hitter for .