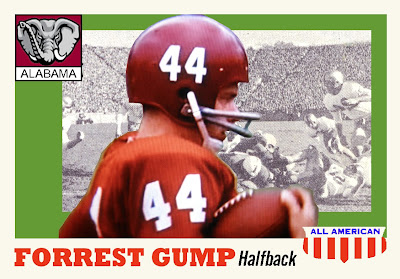 As I've mentioned here in the past, my series of 1955 All-American style custom football card creations has not all been serious attempts to honor the greats and even not-so-greats who have actually played college football.


A half-dozen or so of the nearly 120 cards I've created in the past six years or so pay tribute to college football players whose gridiron exploits were entirely in the realm of fiction or entertainment.


Certainly the most popular of these pop culture figures is Forrest Gump. It was some time after I had begun my 1955-style cards that I realized, as I watched a re-run of the movie, that there was a college football element to the story of that fictional savant simpleton. 'Bama, no less! In deference to the legions of Tide fans, I'll refrain from further comment on where Gump fits into the continuum of Alabama alumns.
Once I knew I wanted to create a Forrest Gump football card, I set about assembling the pieces I'd need . . . basically a picture and biographical details.
I was unprepared for how difficult it became to find a suitable photo. A Google search of Tom Hanks and Forrest Gump failed to turn up any in-uniform pictures that would be suitable for reproduction. I spent some time scouring eBay and a few other sites for movie press kits or stills, but those I did find did not include a football picture.
In desperation, one night I set my digital camera on a tripod in front of the TV and began playing back a recorded copy of the movie. When I got to suitable spots in the movie, I hit the pause button and moved back and forth through the scenes, frame-by-frame, u 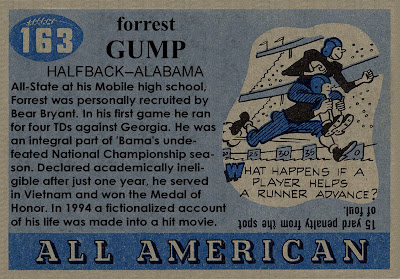 ntil I found what I was looking for. I shot the photo off my screen in extremely high-res and was very happy with the quality once it was reduced to ink-on-paper on the front of my card.
In reading the back of my card you may notice some variance with the details as presented in the movie. That's because I decided to go to the source, and work from the original 1986 novel by Winston Groom.
Because the book is written entirely in first-person dialect, it is not an easy read, but it was worth the effort and as the base document for my card back, I believe it was the right way to go.