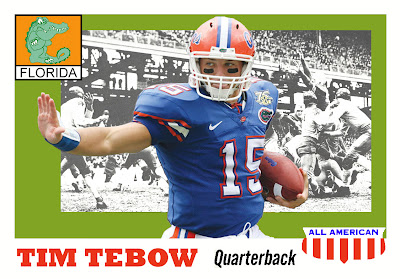 Now that the NLF draft is over, I'm able to complete a few football card custom creations that have been hanging fire.
I wanted to be able to include the information on my card backs of which team had tkane the player, and in which round.
Here's the first . . . Tim Tebow. I was glad to see him taken in the first round. I hope his pro career continues the success he enjoyed in college.
I was fortunate enough to see Tebow play in the first college football game I ever attended. (At least the first one I remember, but that's a story for another time.) My daughter and I attended the 2007 game at Oxford between Ole Miss and then-National Champion Florida.
The Rebels made it an unexpectedly close game and sometime during the third quarter, when Mississippi was driving towards what would have been a go-ahead score, I realized I could die a happy man. I mean I really COULD die. It was only about year after my heart attack and I was screaming the Rebel yell like a University Gray at Gettyburg. That road trip with my kid was something special, and watching Tebow that day, I knew he was something special.
Anyway, here's my 1955 Topps All-American style tribute card. You can see more of my custom cards at www.tinyurl.com/customcards . I'll be posting two other new football cards in the next few days, along with a couple of new baseball creations. 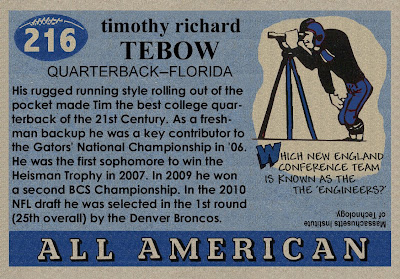