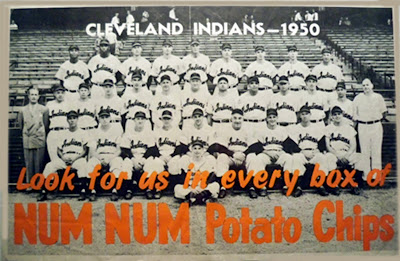 An interesting advertising adjunct to the 1949-1950 Num Num Cleveland Indians premiums has been brought to our attention by Cleveland-area collector Bob Seedhousde.
About 17" x 11" with a vertical fold at center, this glossy poster appears to be a point-of-purchase promotion for the Indians pictures that were packed in boxes of Num Num potato chips.
In 30 years of cataloging, I can't recall ever seeing or hearing about such an ad piece, so it is definitely rare, even though it might not be of exorbitant value due to the relative lack of interest in the first Num Num premiums.
We date the premiums as 1949-1950 in the Standard Catalog of Baseball Cards, but Iwonder if that's strictly accurate. The checklist for the Num Num set has been around forever, and seems to indicate a multi-year run for the pictures.
For those unfamiliar with the issue, the early Num Num premiums are nothing more than examples of the 6-1/2" x 9" black-and-white team-issued picture pack photos that have been rubber-stamped on back with an advertising message from the chip company and an offer for mail order pictures.
Since the Indians picture pack photos for both 1950 and 1951 were re-issues of the 1949 "action" pictures, or new player pix in the same posed-action format, it is possible these overprinted pictures were issued 1949-1951. In 1952 Num Num created a smaller card format for its premiums, though the photos continued to be a version of those issued in the team photo pack.
Posted by Bob Lemke at 1:05 PM