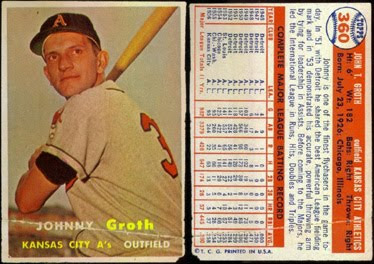 After having been involved in cataloging baseball cards for nearly 30 years, I'm surprised that this got by me.

Recently on the post-war section of the Net54 forums, Connecticut collector Mark Rios posted a picture of a 1957 Topps paper proof card. While blank-back paper proofs are not unheard of from the 1960s and 1970s, I'd never before seen a fully printed (front and back) paper proof for any Topps issue, much less one of my favorite sets of all time, the 1957.

Mark not only posted the front and back pictures, but also a copy of an ad from one-time Topps art director Woody Gelman's son Richard that had appeared in the September, 1979, issue of The Trader Speaks, offering 32 of the paper proofs for $6 each.

According to the ad, all of the proofs, which were described as VG condition, were from the high-number series of '57 Topps, #353-407. The Gelman ad didn't offer the real prizes among the 1957 Topps high-numbers, #400 Dodgers' Sluggers and #407 Yankees' Power Hitters, so it is unclear whether those were actually produced in the paper proof version.

As far as I know, no uncut sheet of 1957 Topps high-numbers exists to confirm which 132 cards appeared in what combination of single- and double-prints or even multiple-prints. There are 55 different cards in the high-numbers checklist.

We likewise do not know which cards from that series survived in the paper proof version. It was almost certainly some multiple of the 11-card rows in which Topps cards were formatted on sheets at that time. It may have been 33 cards, or 55 cards, or 66 (1/2 a sheet) or even 132 cards.

What seems likely, considering I have never seen a single 1957 paper proof offered at any show, in any ad or auction, or on the internet, is that each of proofs Gelman advertised, and any others that may have existed, are unique. It's interesting to note that the same $6 Gelman was asking for the paper proof 1957s was the same price at which he was offering nearly two dozen 1970 Topps Cloth Sticker singles. Today a common from that test issue is cataloged at $1,750, so that should provide a good gauge for the value of the 1957 paper proofs.

Given the unique nature of the 1957 high-number paper proofs, I'm not sure whether or not they will cataloged in the Standard Catalog of Baseball Cards, but I was sure they were worth mentioning in this space.