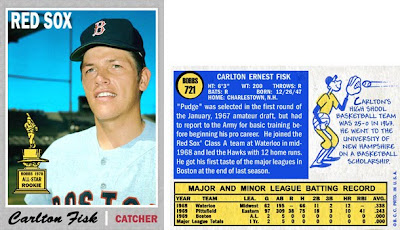 I found a couple of great early images of Carlton Fisk and thought I'd take a shot at creating what his cards might have looked like if Topps had included him in its 1970 or 1971 sets, rather than waiting for 1972 to give him a rookie card.

I know Topps "All-Star Rookie" designations reflected selection of that honor for the previous year, but I chose to make it a "pre-season" designation.