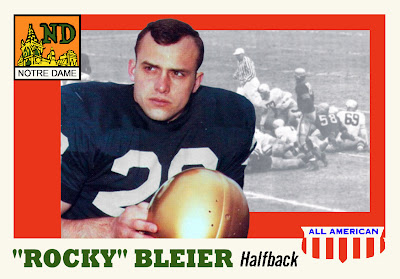 In my Sept. 1 posting about how I got into creating custom 1955 Topps All-American style football cards, I published a "wish list" of former college players that I would like to include in my on-going update set.


Quick to respon was Indiana collector Harold Dieter, who sent me a card of Rocky Bleier in his Notre Dame uniform. The card originated in one of the early 1990s Collegiate Collection team sets of former Fighting Irisher players.


The portrait on the card was just what I needed to create my Rocky Bleier tribute card, and just a couple of weeks later, it was finished and I was sending a couple of the cards off to Harold. Now I'm sharing it with you.


Why Rocky Bleier? Primarily because he is virtually a local boy. Bleier was born and raised in Appleton, Wis., about 45 minutes east of my locale here in Iola. He is probably the most famous and accomplished football player native to Wisconsin; certainly in this part of the state.


Bleier attended St. Francis Xavier High School in Appleton. On the varisty football team from 1961-1963, his teams were 9-0 each season. He was All-State running back three times and All-Conference as a linebacker one season and defensive back another. In three seasons he amassed 2,985 rushing yards, 55 touchdowns and a 9.4 yard average. His uniform #23 is the only one retired by the Hawks, which named their football field for him.


While many schools felt that Bleier was too small (5'10", 175 lbs.) for big-time college football, Notre Dame's new coach Ara Parseghian was willing to give him a chance. and Bleier became a major contributor at starting halfback to the Irish's National Championship team in 1966. He was named captain of the 1967 team.


The Pittsburgh Steelers chose Bleier in the 1968 NFL draft, but not until the 16th round. He was the 417th player selected. Bleier had a decent rookie season with the Steelers, playing in 10 games. Then he was drafted again -- into the U.S. Army at the height of the Vietname War.


On Aug. 20, 1969, Bleier's unit was ambushed and he was shot in the left thigh. As he lay wounded, a grenade landed nearby and tore up his right foot. He earned the Bronze Star and Purple Heart for his combat service.


While rehabilitating form his injuries, Steelers' owner Art Rooney sent Bleier encouraging messages and told him they would support his return to the NFL, even as his doctors told him that was an unlikely outcome.


Bleier spent the 1970 season on Pittsburgh's injured reserve list, and most of 1971 on the taxi squad, though he was activated for six games without seeing any action.


In 1972, with his old college quarterback Terry Hanratty leading the Steelers offense, Bleier began to work himself into an integral part of the dynasty that won Super Bowl titles in 1974-1975 and 1978-1979. His best season was 1976 when he rushed for 1,036 yards and his combined 1,330 yards rushing and receiving were tops on the team.


Bleier retired after the 1980 season. In December of that year, his book Fighting Back was adapted for an ABC-TV Movie of the Week starring Robert Urich. (I saw a note while googling around that Urich played college football at Florida State . . . I'll have to look into that.)


So in a nutshell, local boy makes good and triumphs over adversity. That's why I had Rocky Bleier on my wish list for a custom card.
I received a couple of other offers to help on my wish list that seem like they will pan out. Watch this space for update. 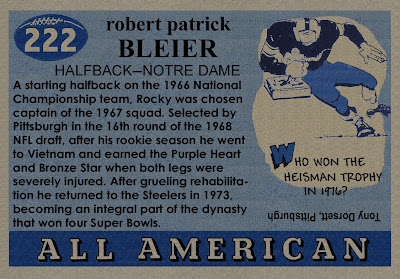