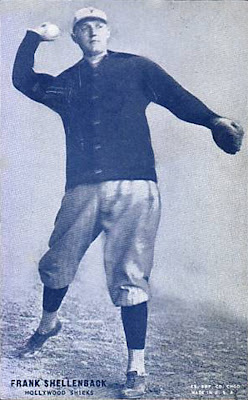 Whether it was just bad luck or bad timing, Frank Shellenback picked a bad time to test the will of Charles Comiskey in a salary dispute. Though he hadn't had a winning season with the White Sox in either 1918 (9-12) or 1919 (1-3), Shellenback held out for a better contract in 1920 and thus was not on the White Sox roster on opening day.

Problem was, that was the date on which a spitball pitcher had to be "registered" as such to continue to throw the pitch in the major leagues under a grandfather clause. And the spitter was Frank Shellenback's money pitch.

The outlawing of the spitball thus trapped Shellenback permanently in the minor leagues, specifically in the Pacific Coast League, since most league's went along with MLB in banning "new" pitchers from throwing the wet one.

From the day he turned pro out of Santa Clara College, Shellenback never pitched in a lower minor league. At age 18 in 1917 he pitched for Providence in the International League and Milwaukee in the American Association, both Class AA leagues, at that time the highest minor league level. He was a combined 12-9.

While on his salary holdout in early 1920, Shellenback was pitching for Vernon in his first year in the Pacific Coast League. He finished his professional career in the PCL 18 years later, never having another appearance in the major leagues.

Statistically, Shellenback is arguably the best pitcher in PCL history. In 18 seasons he won 296 games, a record for a pitcher in any minor league. In that time he lost 177 games. His overall minor league record was 316-191 with an ERA of 3.56.

In a lengthy feature about Shellenback in 1953,The Sporting News reported that at one point in his PCL career, Shellenback won 34 out of 35 games.

Now, I've learned that sometimes what was printed in TSN has to be taken with a grain of salt, and while a lengthy perusal of box scores could confirm or refute that report, it isn't a high enough priority of mine to put in that time.

The paper reported that while with the Hollywood Stars, beginning with his game on May 18, 1930, Shellenback won 14 in a row to the end of the season. He opened the 1931 season with five more consecutive wins, before taking a loss, then winning another 15 in a row.

While not discounting those wins, Shellenback was reported to have been especially proud that every one of those wins was a complete-game victory.
﻿﻿﻿﻿﻿
﻿﻿﻿﻿﻿

At the end of his pitching days, Shellenback had been playing-manager for Hollywood in 1935 and San Diego, 1936-1938. In 1936-37 at San Diego, Shellenback was Ted Williams' first manager in professional baseball.

After his pitching days, Shellenback managed Minneapolis for part of the 1948 season. In the early 1950s he was Leo Durocher's pitching coach on the New York Giants. From 1956-1959 he was the N.Y./S.F. Giants' director of minor league personnel, then scouted for the team through 1969. In 1943 he was elected to the Pacific Coast League Hall of Fame.
﻿﻿