Swift made comeback for 1,000th game 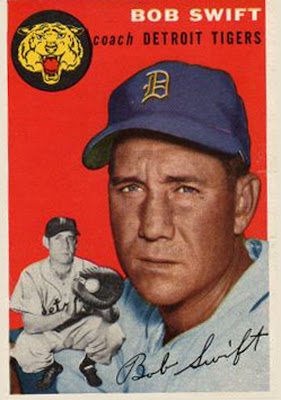 Having played just 28 games, batting .138 as a backup catcher for the Detroit Tigers in 1952 at the age of 37, Bob Swift retired. His former batterymate Fred Hutchinson had taken over the reins as Detroit manager in mid-season 1952, and Swift joined his coaching staff in 1953.

Whether he knew it at the time he retired in 1952, or learned of it later, Swift had left the playing ranks with 999 major league games under his belt.

When the Tigers were officially eliminated from the '53 pennant race in late August, Hutch offered Swift the chance to round out his career games-played mark to an even 1,000.

So, on Sept. 22, when the Tigers took the field against Satchel Paige and the St. Louis Browns, Swift began his 1,000th big league game, catching 18-year-old Bob Miller, the lefty bonus baby who had signed with the Tigers earlier in the year for a reported $60,000. The game was a match-up between the youngest pitcher in the major leagues and the oldest. Paige's actual age remains a mystery. Baseball's "official" records list him with a 1906 birthdate, but earlier in the season, Browns owner Bill Veeck had let slip to a reporter that Paige was actually 52 years old. Whether or not Veeck was being truthful, was mistaken, or just wanted to enhance the legend can never be known.

Detroit lost that day 7-3. Miller pitched five innings before being hit in the head by a line drive and sent to the hospital. Swift was 0-for-1 at the plate with a base on balls.

Perhaps not wanting to end his career on a loss, or maybe just to push his total games played over the 1,000 mark, Swift got one more start in 1953.

On Sept. 27, the last game of the season, the Tigers were in Cleveland to face Bob Feller. The Tigers won Swift's 1,001 major league game 7-3, with Swift contributing an RBI double and a walk.

While that was the end of Swift's major league playing days, he played in 85 more professional games in 1955-56. In 1955 he played for Oakland and Seattle in the Pacific Coast League, batting .248. In 1956 he was playing-manager for the Class A Albuquerque in the Western League, batting .263 in 32 games.

By 1961, Swift was managing in the Tigers farm system, at Duluth-Superior (Class C) in 1961, and at AAA Syracuse in 1963. In 1965, Swift returned to the major leagues at Detroit Tigers manager for two seasons. 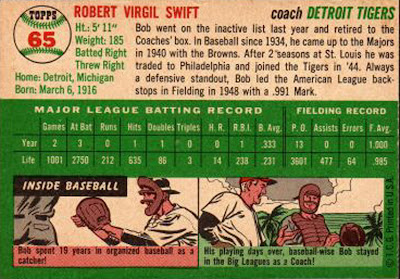