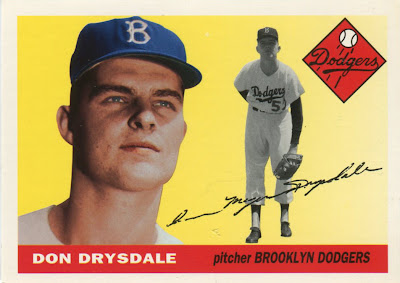 Collector Mike Simpson recently brought to my attention an error appearing on the 1955-style card of Don Drysdale from the 1995 Topps Brooklyn Dodgers Archives set.

The facsimile autograph on the front of the card is not that of the Dodgers' pitcher, but rather than of his widow, Ann Meyers Drysdale.

Ann Meyers was the first woman elected (1993) to the Basketball Hall of Fame. She had been a star player at UCLA, a member of the silver-medal winning U.S.A. women's basketball team in the 1976 Montreal Olympics, and had played professionally in the Womens Professional Basketball League.

After her playing days she became a television analyst and executive with Phoenix's teams in the NBA and WNBA.

A cursory search on eBay doesn't turn up any Topps cards of Ann Meyers, but I suppose it's not unreasonable that they would have a file autograph of her. How that autograph got on the retro-1955 Don Drysdale card is anybody's guess. Maybe somebody in the art department saw the last name "Drysdale" and assumed it was the correct sig. Or perhaps it was just incorrectly selected from a pull-down menu.


In any event, I don't remember this autograph error even being mentioned when the Dodgers Archives set first came out 16 years ago. Given the limited print run for the set, I doubt the error was ever corrected.
Posted by Bob Lemke at 8:36 AM