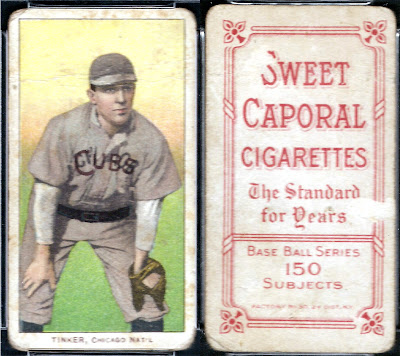 Presented here for your consideration is a strange T206 Joe Tinker, hands on knees, card.

Hatfield offered the card on eBay at $59,999, with no takers, but his offer was more to solicit information than bidders.

The card was the subject of considerable commentary on the popular http://www.net54baseball.com/ vintage card  forum. While most of the veteran collectors who are regulars on that site appeared skeptical, there were others who do not dismiss out of hand the possibility that the hobby may be faced with a "new" variation in the venerable T206 set.

Some of the skeptics cited the lack of third-party certification as evidence the card was not original. Hatfield has since had the card authenticated and graded (Fair 1.5) by PSA, though no mention was made by the TPG of the "variation."

A very telling bit of information posted in the Net54 discussion is that a proof version of the T206 (front view) card of Frank Schulte exists with CHICAGO across the jersey, rather than the CUBS that is seen on the issued version. Like the Tinker, hands on knees, the Schulte, front view, was issued in the original "150 Subjects" series of T206 in 1909. 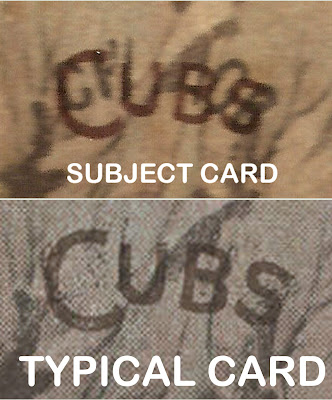 It is not impossible that the Tinker card was originally set up for printing with CHICAGO, rather than CUBS on the jersey, and it was later decided to go with the team nickname. That's only a theory unless or until a proof version with CHICAGO is found. If that was, indeed, the case, then it would appear that early Tinker cards were printed and packaged with the remnants of the CHICAGO designation on the jersey, but those remnants were quickly erased from the litho stone doing the printing.

Confirmation of these theories will require that other examples of the Tinker card with the CHICAGO underprint be reported.
Posted by Bob Lemke at 10:46 AM