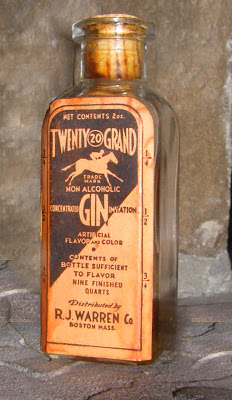 Earlier this winter I backslid (backslud? backslided?) on a collection that I had disposed of six or eight years ago.

In the late 1990s, about the time I discovered eBay, I began a collection of memorabilia related to the thoroughbred champion Twenty Grand. The collection began at a Chattanooga antique mall where I found a large, about 2' x 3' cardboard advertising display sign for Twenty Grand cigarettes. The thick cardboard sign had a self-folding "frame" and a large color portrait of the horse that won the Kentucky Derby in 1931.

I soon added a large Sunday litho color picture from the Montreal newspaper La Presse, and the hunt was on.

The big bay won 14 of his 25 races, finished second four times and third three times. He was retired to stud but proved to be sterile. He lived for 20 years.

In 1957, he was elected to the National Museum of Racing and Hall of Fame.

There are many contemporary and retrospective accounts of Twenty Grand's career, so I won't go into it in this space, though I do recommend you look it up if you enjoy horse racing or a good American athletic story.

Perhaps because he was something of a "Cinderella Story" in thoroughbred racing, Twenty Grand caught the fancy of the American public. His story and his successes were a bright spot amidst the national gloom of the Great Depression.

As a collector, I was amazed at the scope of items issued throughout the 1930s and 1940s that carried Twenty Grand's name or image. I'm sure there were more commercial products trading on Twenty Grand's fame than any contemporary athlete. And why not? At a time when Babe Ruth was bringing down an $80,000 salary from the Yankees, Twenty Grand had earnings of over $260,000.

I doubt, though, that Twenty Grand's owners ever saw much in the way of revenue from all the products that bore his name. I'd guess that perhaps the Axton-Fisher tobacco company, that introduced Twenty Grand brand cigarettes as an economy brand in June, 1932, probably paid royalties to the Whitneys, but I don't think most of the other products did.

And, boy, were there a lot of other products. Besides many advertising items for Twenty Grand cigarettes such as posters, pinback buttons, matchbooks, cigarette packs, etc., there were picture postcards, razor blades, batteries, aspirin, ale and even a bard game. A top of the line Duesenberg automobile introduced in 1933 quickly acquired the nickname of Twenty Grand, though whether in reference to the race horse or its reputed price tag is unclear.

Besides examples of all the Twenty Grand branded consumer merchandise, my collection included blood horse magazines, programs from his races and latter-day collectibles in glass, ceramics and fine art.

After collecting for nearly 10 years, my Twenty Grand accumulation had reached the point where there was seldom anything new to add (at least in my price range), so I packed it all up and donated it to the National Museum of Racing and Hall of Fame at Saratoga, N.Y.

I'm at a loss, then, to explain my recent purchase of a 2 oz. bottle of Twenty Grand "non-alcoholic concentrated gin imitation artificial flavor and color." I found the bottle on one of my infrequent nostalgic eBay searches for Twenty Grand collectibles. I had never encountered this item previously in my heyday of collecting 20G items.

This little (about 4" tall and 1-3/8" square) thick glass bottle is a remnant of Prohibition. While making homemade hootch was a popular hobby in the dry decades between 1919-1933, if the amateur booze had any taste at all, it was usually awful.

To give the illegal homebrew some semblance of similarity to types of liquor popular before the 18th Amendment became law, an entire industry sprang up to make and offer artificial flavorings that could be added to the white lightning. Popular men's magazines of the era, such as Police Gazette, had dozens of ads selling the little bottles of moonshine taste enhancers. Besides the gin, there were additives to mimic brandy, whiskey and other liquor shelf staples.

According to the label, this bottle of artificial gin additive was "sufficient to flavor nine finished quarts." It probably sold for a quarter or 50 cents.

There is still about a half-inch of urine-colored liquid in my tightly corked bottle. I haven't had the courage to pull the cork to see what the stuff smells like after nearly 70 years. Since Prohibition was repealed in 1933, and Twenty Grand was at the peak of his popularity in 1931, this product probably didn't enjoy too long a life in commerce; maybe that's why I hadn't previously encountered it.


I think rather than forwarding this to the Hall of Fame, I'll add it to my cabinet of vintage beer and liquor collectibles. That collection tends towards the politically incorrect type of booze memorabilia. Someday mayble I'll scandalize you by publishing pictures of some of it. 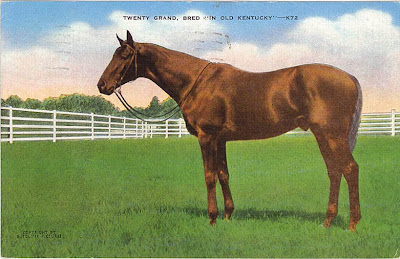