One of my favorite baseball cards from childhood was the 1953 Bowman Gil Hodges, with its background of Ebbets Field's left field. I still own the well-worn example of that card that I inherited from one of my older brothers or their friends.

I was always drawn to the Schaefer Beer billboard, with the clock atop it. For a time 30-40 years ago, when a local liquor store stocked Schaefer's, it was my beer of choice.

While reading a 1960 issue of The Sporting News a while back, I was surprised to learn that the clock that sat atop that beer sign in Flatbush continued to serve its intended purpose for at least 30 years after Ebbets Field was demolished. 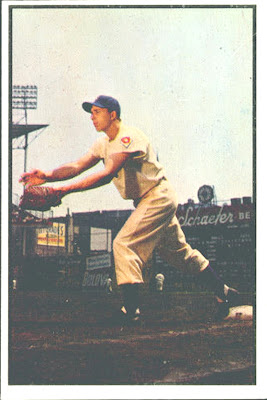 An article in the April 24, 1960, issue of TSN detailed the auction of Ebbets Field relics that was held in the stadium's rotunda just prior to the arrival of the famed baseball-painted wrecking ball.
While the stadium clock was not included in the auction, the article mentioned that it had been sold by real estate developed Marvin Kratter to the Asheville Tourists for installation at McCormick Field. No mention was made of the price the wreckers received for the clock.

The TSN article did have other specifics, though. It was mentioned that $2,300 was realized in the auction. By far the biggest bid was for the cornerstone, purchased for $600 by then-president of the National League, Warren Giles.

The Ebbets Field cornerstone was described as about 3' by 4' by 1', cut from red-brown Connecticut Granite. After considerable effort, the stone was busted open and a copper box extracted.

The sports weekly enumerated the contents as including a photograph of Charles Ebbets, letters from "baseball greats of old," a copy of the N.Y. Morning Post newspaper, and other paper item that did not survive intact their nearly 50 years' entombment.

Six U.S. one-cent coins were also in the cornerstone. Five were dated 1912, presumably new coins from the year the cornerstone was lain. There was also an 1811 cent, which the paper said was "worth $7.50 to a coin collector today." If the Lincoln cents were uncirculated, or nearly so, at the time they were included in the trove, they would have a numismatic value today of $100-200. A nice circulated 1811 cent is a $400-500 coin in today's market.
The Ebbets Field auction also included what the paper described as "gold-plated bricks" that sold for $1 apiece, flower pots full of infield dirt at 25 cents, and "broken bats, autographed balls" and "pictures of Dodgers heroes." The paper said, "Hardly anything sold for more than $5."
Attendance estimates of the crowd at the auction ranged widely, from 200 to 1,000.


McCormick Field, which has served Ashville baseball since 1924, was remodeled in 1992. If the Ebbets Field clock was still there at that time, it seems to be gone now. It had been reported that the clock had been atop a scoreboard in right field. Recent photos of the ballpark show no clock there.
I suppose a little digging on the internet would uncover the current location of the Ebbets Field clock, but I'll leave that for someone else. I prefer to remember it as it appear on Gil Hodges' 1953 Bowman baseball card.
Posted by Bob Lemke at 10:46 AM