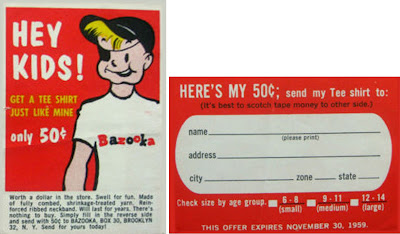 A few days ago we posted an entry about the 1959 Topps All-Star Rookie Team paper selection ballots that were wax-pack ride-alongs (to the tune of a reported 30 million pieces).
Coincidentally, a rare surviving example of that paper-stock insert was offered in a Sept. 1 eBay auction where it sold for $469.

Paired with the rookie ballot in that auction was another paper insert that was purported to have also originated in 1959 Topps baseball card wax packs.


The auction was reported to us by regular contributor Larry Serota, a dedicated vintage Topps collector, who said he had never seen the other insert. Neither had we, to the best of our recollection.
The insert was an offer for a Bazooka t-shirt, available for 50 cents.

The insert has a "closing" date of  November 30, 1959. While that would seem to suggest a 1959 issue date coincident with the baseball season, it does not necessarily preclude this from having been inserted into 1958 wax packs -- baseball, football or even non-sports. Anecdotal evidence points to this insert being a 1959 Topps baseball ride-along. It will likely be added to the Standard Catalog of Baseball Cards as such in forthcoming editions if controverting evidence is not forthcoming.

Your input is welcomed.
Posted by Bob Lemke at 11:34 AM