Pretty Pictures: Ballplayers get all the good-looking babes 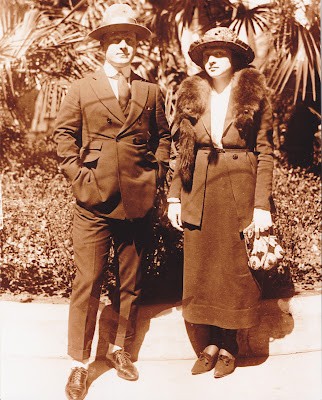 Continuing with my periodical presentation of vintage photos amassed over 30+ years in the sportscard publishing world is this trio of photos of baseball players with their wives, fiancees or girlfriends.
Pictures of players and their babes were common in decades past. It's not something you see much today.
The first picture shows black-balled (an interesting story, I'd like to reprint my old SCD features on the topic some time) batting king -- he led the Federal League in hitting in both of the circuits seasons as a major league; .370 with Indianapolis in 1914 and .342 with Brooklyn in 1915 -- Benny Kauff.
There's no date on the photo, or identification of the lady wearing the dead things around her neck. The photo presumably dates from the 1910s, when Kauff was in his prime. Ain't he the hep cat? 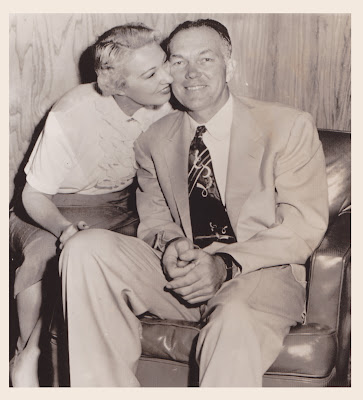 The second photo is a 1954 AP Wirephoto of Yankees great Bill Dickey. It's datedlined Jan. 20 from Little Rock, Ark., and captioned "Kiss Deserved."

The cutline reads, "Mrs. Bill Dickey kisses her husband to congratulate him on being elected to baseball's Hall of Fame today. The former New York Yankee star catcher makes his home here." 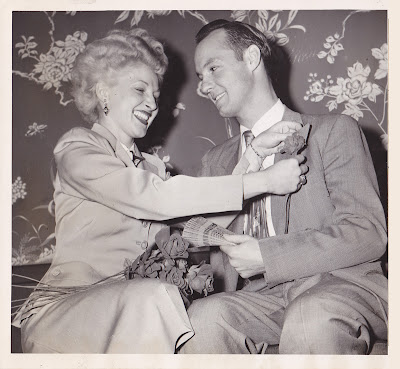 The final picture is from Acme Telephoto. It shows American League pitcher Bob Cain with his intended, and explains why he's holding a mittful of tickets.

The photo is datelined Nov. 12, Cleveland, Ohio. The cutline reads, "Detroit Tigers pitcher Bob (Sugar) Cain, who went to work today (11/12) selling season tickets for the Cleveland Indians, talks over his new job with his fiancee, Judy Stevens. The pitcher took the off-season position to remain in town, near Miss Stevens whom he plans to marry Dec. 1. Cain met his future bride during his visits here as a pitcher with Detroit, and love blossomed."

The mention of Cain as a Tigers pitcher pinpoint the year of the photo as 1951. Three months after the picture was taken, Cain was traded to the St. Louis Browns.

Today, of course, no player on the roster of one team would be allowed to take an off-season job with another team. But then again, players today don't take off-season jobs.
Posted by Bob Lemke at 11:24 AM