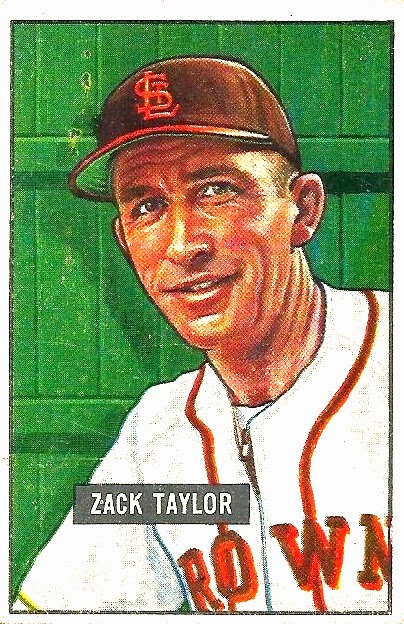 Back in the early 1980s when I first became involved in the baseball card and memorabilia hobby on a professional basis, among of the more popular non-card collectibles were World Series press pins.

They were small, and thus readily displayed, colorful and not all that expensive if you limited your acquisitions to post-war models.

Sadly, an influx of creditable Chinese fakes around the turn of the century largely put the mockers on press pins as a viable collectible for the average hobbyist.

To be sure, press pins have cash value today, but I recently read an account in an old issue of The Sporting News that detailed how a press pin came to be worth tens of thousands of dollars to Zack Taylor.

had been a coach for the Pittsburgh Pirates during the 1947 season, When Bill Meyers was hired to replace Billy Herman at the end of the year, was let out by the Bucs. 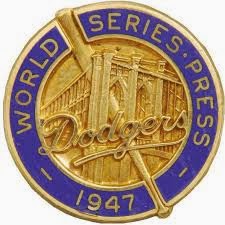 As part of his job search, he attended the World Series games in New York to rub elbows with owners and general managers. In his “from the RUHL BOOK” column in the Nov. 19 issue of TSN, Oscar Ruhl reported how the loan of a press pin helped Taylor get a new job.

“Zack Taylor credits his new job as manager of the Browns to the luck of a button—a World’s Series press pin,” Ruhl wrote.

“Or at least he is crediting much of his success in landing the post to a small lapel button of the kind which are issued to sports writers and club officials at the annual classics.

“Realizing he needed this credential to gain admittance to restricted quarters to make the contacts for a job . . . Taylor appealed to a Pittsburgh sports editor, Al Abrams of the Post-Gazette, telling him the loan of the button ‘may help me get a job.’

:Zack used the button two successive nights and, returning the pin, told Abrams: ‘I think something will come out of this. I can’t tell you now whom I was talking to, but you’ll hear about it later.’

“A day after his appointment as Brownie manager, Taylor wrote to Abrams: ‘I want to let you know that I will always remember how nice you were to me in New York during the World Series.”

Taylor managed the Browns through the 1951 season, never finishing higher than sixth place in the American League.


Ruhl’s column didn’t specify whether it was Yankees or the Dodgers press pin that gave Taylor the access he needed to land his first big league managerial job. Value of either (genuine) today seems to be in the ballpark of $600-750