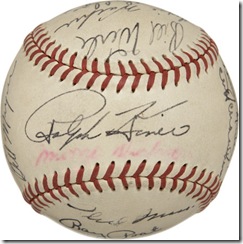 Though this Ralph Kiner autograph on a late-1940s team-signed Pirates ball is authentically penned, the Bucs’ slugger was reported to have used a rubber stamp for the day-to-day chore of providing souvenirs for fans and friends of the team.

There was an interesting collectibles-related article in the July, 1948 issue of Baseball Digest that is worth sharing 60+ years later.

All but the most novice of today’s autograph collectors are familiar with the possibility that some sigs found on such balls were never penned by the player whose name appears. Besides the rubber-stamped versions mentioned below, it was common in some locker rooms for the clubhouse boy to forge certain players’ autograph. As this Pirates’ beat writer points out, the practice was condoned as a way to appease fans rather than with any intent to defraud latter-day collectors.

In the Pittsburgh Post-Gazette

The autographed baseball industry takes thousands of balls out of circulation annually, frays the tempers and fountain pens of hundreds of athletes and provides a peculiar form of happiness pursued by innumerable gloating small fry.

It inevitably steps up business in an offshoot business, the manufacture of rubber stamp signatures. Maybe you thought the only man who thumped his letters with a rubber stamp was your congressman, an unfortunate fellow whose pleas for votes are as impassioned as his signatures are impersonal.

But you ought to visit a club’s dressing room just before a game. There, the autographed baseball industry is operating under conditions approximating those of the sweatshop. That is to say, the tireless clubhouse boy stamps baseballs till his fingers grow numb, meanwhile finding time to scavenge ham sandwich and soft drink for an indolent athlete.

Some old-fashioned players still insist on signing baseballs themselves. They take a certain pride in the knowledge that fans still remember them. But, for the most part, an autograph coming from a dressing room belongs in the classification of self-legalized forgery.

It was Hank Greenberg who started the practice of using rubber stamps among the Pirates.

Hank carried his own stamp from Detroit to Pittsburgh last season and had the clubhouse boy imprint his autograph on whatever balls were requested.

Ralph Kiner, whose autograph was in demand as much if not more than Hank’s, soon followed his example. Afterwards, thanks to the persuasiveness of Roger Jorgensen, the clubhouse boy, the practice became more or less general.

Jorgensen had the Pirates who wanted rubber stamps sign their names on a piece of paper and took the signatures to a Pittsburgh firm manufacturing marking devices, which reproduced them at $2.50 a copy.

There is a technique to stamping autographs on baseballs and Jorgensen mastered it through the fatiguing process of trial and error. For instance, he has a special position running lengthwise with the seams for Dixie Walker’s space-taking scrawl.

Bing Crosby’s and Ralph Kiner’s autographs are stamped together in a prominent position, for Jorgensen long ago found that the recipient of the ball always looks for these two names first.

Crosby’s name is put on a ball even if he doesn’t happen to be traveling with the club. Somehow, a fan who gets an autographed ball at Cincinnati and reads in the newspaper that Crosby had played an exhibition golf match the same day in White Sulphur Springs never seems to notice how impossibly ubiquitous is the Pirate co-owner.

After all, junior is the one to be pleased and he can easily be reassured by the vague paternal explanation that “Bing sure gets around.”

A rookie, plagued with fears that he might not make the team, isn’t likely to invest $2.50 in one of the marking devices. Ironically, one of the veterans who started with the Pirates in 1948, Joe Grace, obtained a stamp and then was handed his unconditional release.

Right now about 15 Pirate players are using rubber stamps for autographs. Others, including pitchers Rip Sewell and Hal Gregg and Manager Bill Meyer, still sign with a fountain pen, provided it isn’t their own. A stickler for dressing room integrity, Jorgensen never forges a signature, no matter how inaccessible the player or how insistent the fan.

As far as can be determined, Jorgensen never has developed writer’s cramp from wielding his rubber stamp. Nor has any Pirate pitcher developed a sore arm scribbling autographs for anxious fandom. 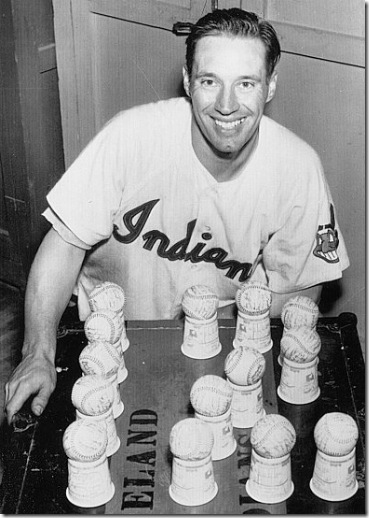 Autographing baseball in the clubhouse was a fact of life for major leaguers in days gone by. Here, on May 1, 1955 when he notched his record 12th one-hit game, Bob Feller poses with 14 of the team-signed souvenirs arranged as a "12".