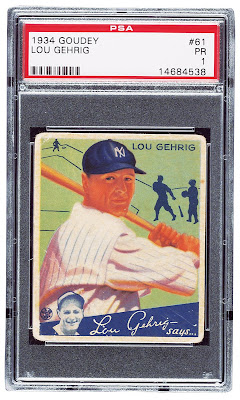 Change happens. When we first compiled the price guide that appeared in the Spring, 1981, issue of Baseball Cards magazine we priced all vintage (pre-1981) cards in the grades of Near Mint, Excellent and Very Good. In our descriptions of grading standards we reflected that the current market seemed to dicate that cards in Good condition sold for about 50% of the listed VG price, and cards in Fair condition sold for about half of Good (25% of VG). We never specified what a card in Poor condition should be valued at, but 50% of Fair (12.5% of VG) would have seemed reasonable.
My recent observations of auction sales of low-grade pre-war superstars' cards indicates those old price points are no longer reflective of today's market. Whether or not this applies to complete sets, card lots or "commons" is not something I have studied in any great depth, so I'm going to limit these comments to cards of the game's greatest, like Ty Cobb, Babe Ruth, Lou Gehrig, Joe Jackson, Joe DiMaggio and Ty Cobb. To a slightly lesser extent I believe this also applies to Honus Wagner, Cy Young, Christy Mathewson, Walter Johnson and other top names of their eras.
The catalyst for bringing up this topic was the recent eBay sale of an extraordinary 1933 Goudey Babe Ruth card, and the many sales of off-grade superstar cards in the June 18 debut sale by Collect.Com Auctions.
The eBay auction that caught my eye was for a 1933 Goudey Babe Ruth #149, the red-background version of the waist-up batting pose. The card had been authenticated as "Authentic" by PSA, and would have graded Poor by old-school stadards based on the fact that at some point in its past, likely when it was fresh out of the pack, a previous owner had cut the lower-right corner away from the rest of the card. On '33 Goudeys, that comprises the "CHEWING GUM" end of the red panel at bottom. Why somebody would have excised that piece of the card is beyond my comprehension. If he didn't like gum, why did he lay out a Depression-era penny for it (feel free to speculate in the comments section)? 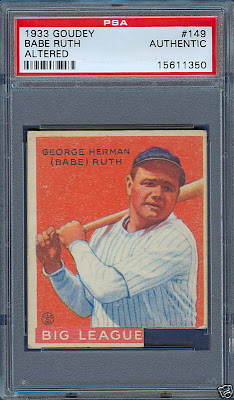 Without the surgery, the card looks like it would have survived to this day in Excellent condition, making it a $3,500-4,000 card in today's market. In spirited on-line bidding (30 bids by 17 different bidders), the card sold for $404.99. "Book" value for the card in VG condition is $1,450, so using the old valuation rule of thumb, it should have a value in Fair of $362.50 and a speculative Poor value of $181.25. Why someone was willing to pay nearly 2-1/4 times "book" value for such a card is, again, open to speculation.
Anoither notable example of premium pricing for low-grade superstars was found in the June 18 Collect.Com auction. That sale offered a PSA-graded Poor-1 example 1934 Goudey Lou Gehrig #61, the green-background batting pose. With a theoretical value of $100 by old market standards, the card sold for $497. In this example, I'm willing to concede that much of the premium that was paid for this card was probably due to the fact that PSA badly low-balled the grade. While the card was well-loved in its 65 years, and along the way suffered a very ugly crease across its lower-left portion, there was no intentional damage, missing print or paper, or other flaws that should have legitimately kept it out of a Good slab. But even at that level, it's a $400 card.
Here're a handful of other examples from the Collect.Com auction. I'll list the card, then its "book" value in its condition, then its selling price. All of these cards were authenticated and graded by PSA. In cases where PSA labeled the card "Authentic," we'll presume Poor condition.

Now, to be fair, there were a few Authentic and Poor cards of Ruth and Jackson that never got an opening bid, but that was likely because the minimum bid had been pegged too ambitiously. I believe my point is made by the examples cited above.

Another characteristic that most of the examples here seemed to share was "eye appeal" that significantly outshined their assigned technical grades. If a collector was buying the card, rather than its plastic wrap, the healthy competition of the auction environment created a premium price structure.

Upon reflection, I think what I see here is a trend that has developed for collectors who can never aspire to own investment-grade (NM or better) specimens of the hobby's greatest cards of the game's greatest players, are willing to stretch their budgets to acquire a genuine, career-contemporary card. I doubt that they'd be willing to make the same concessions to build a complete set, but to acquire a showpiece of this caliber evidently makes sense to them.

I think this phenomenon has already extended to the early cards of Mickey Mantle and even, perhaps, Jackie Robinson and Roberto Clemente. Whether it will spread deeper into the post-war cards remains to be seen.