One of the most interesting “card s” in the 1898-1899 National Copper Plate baseball player pictures issue is that of Baltimore pitcher Joe Corbett. Besides being the only piece of baseball memorabilia picturing the Orioles’ one-time 24-game winner, the NCP picture is of special interest because Corbett was the younger brother of renowned world heavyweight champion boxer “Gentleman Jim” Corbett.

Jim and Joe Corbett, with seven other siblings, were San Francisco natives whose father operated a livery stable that provided a meager living for the large family. By the time he was in his mid-teens, Joe had established a reputation around the Bay area as a s 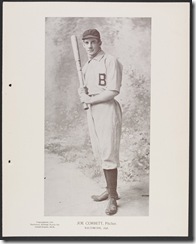 olid ballplayer, having followed in the footsteps of his older (by nine years) brother Jim, who had to abandon his own baseball dreams when he split a finger.

Joe played for St. Mary’s College in Oakland from 1890-1893, then, at age 19, followed Jim East, where the Champ was being lionized following his 1892 victory over John L. Sullivan. While Jim was picking up pin money playing some exhibition ballgames as a first baseman, he was in reality showcasing Joe’s talents at third. Jim persuaded the Washington Senators to give Joe a tryout and he was taken on at the end of the season as a pitcher.

A synopsis of Joe’s professional career is provided on the back of the 1898-dated NCP picture illustrated herewith. Official MLB stats give Corbett’s 1895 record with the Senators as 0-2, though his NCP biography credits him with a tie against Chicago, sandwiched between losses to Baltimore and St. Louis.

The Orioles signed Corbett for 1896, and farmed him out to Norfolk and Scranton, calling him up the big club in mid-August. Once again the NCP write-up is at odds with the official record, but he did notch three complete-game wins and a save in eight appearances. In the Temple Cup Series against Cleveland, Corbett won two games in the O’s sweep, including a shutout in the fourth and final game.

Corbett picked right back up in 1897, winning 24 games (fourth best in the NL) and losing eight. The O’s lost the pennant to Boston by two games, but Corbett had beaten the Beaneaters in three of four starts and notched another win against them in winning the final Temple Cup Series.

Corbett returned to California where he pitched semi-pro ball and wrote sports for the San Francisco Call. He returned to pro ball in 1902 with Minneapolis (1-2). Back on the coast the following year when the Pacific Coast League formed, Corbett helped the Los Angeles Angels to the inaugural season pennant. He was 23-16 with a 2.36 ERA and led the league with 196 strikeouts and eight shutouts.

His performance in the West earned Corbett another chance in the bigs, and he had a 5-8 record with the 1904 St. Louis Cardinals. Corbett developed rheumatism in his throwing arm and he was released at the end of July. His lifetime MLB stats show a 32-18 record with 3.42 ERA and 248 strikeouts in 481 innings.

Corbett returned to the PCL, this time closer to home with the S.F. Seals. He was 14-10 there in 1904 and 3-3 in 1905 before he retired. In the off-seasons Corbett coached baseball at Santa Clara University, where his star player was Hal Chase.

At the age of 33, Corbett attempted a comeback with the Seals in 1909, making 12 starts and compiling a 2.67 ERA though only a 4-7 record. Unfortunately, Corbett missed the cut when Obak cigarettes produced its inaugural baseball card set in 1909.

Corbett is one of nine players in the 1898-1899 National Copper  Plate picture portfolio who are not known to appear individually on any other baseball collectible. He does not appear in the more common 1899-1900 M101-1 Sporting News Supplements.

For lack of reported sales, there is no recent price history for an NCP Joe Corbett picture. An example of this rarity will be available in the June 18 Collect.Com Auction, but it will be sold only as part of what is likely the sole surviving complete “Portfolio” of 50 player 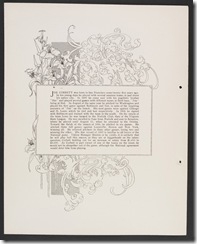 Back of the National Copper Plate picture provides a detailed professional biography of the player, though some details are at odds with the official record.