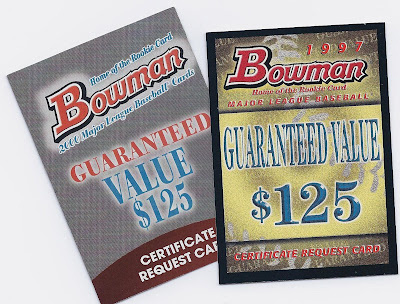 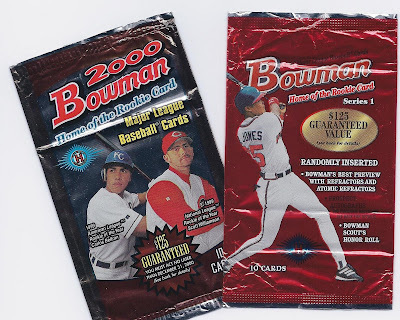 I was going through some boxes of misc. cards recently when I encountered some foil wrappers and redemption "Certificate Request Card" forms for a turn-of-the-century (seems funny to describe the late 1990s that way) Bowman promotion.

To bolster the notion that its "Home of the Rookie Card" brand would retain its value in the future when collected as a complete set, from 1996-2000 Bowman offered a guaranteed value program. Packed in some (many? most? all?) foil packs were forms that could be filled out and mailed in before the end of the the year along with $5 to receive a certificate from Bowman that entitled the bearer to return it with a complete base set three years down the line for a guaranteed payment of $100 (1996) or $125 (1997-2000).

I don't know whether or not Bowman sets from those years held that kind of value, but those who chose to redeem their sets probably made the wise decision. Typical on-line sales (including delivery) of Bowman complete sets in recent weeks have averaged:

Just thought you'd enjoy a blast from the past.