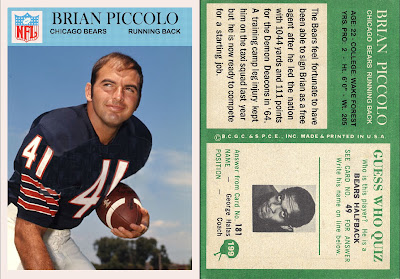 I have completed my second (and final) football-card-that-never-was of 1960s Bears running back Brian Piccolo.


For this card, I chose a photo that appears to have been taken in the same session as the picture that Topps actually used on Piccolo's only "real" football card, in the 1969 Topps set.


I put the photo into the context of a 1966 Philadelphia Gum Co. card. I could have used the 1966 Topps "television" style format, but in 1966, Topps only had the license to produce cards for the American Football League players; Philadelphia had the contract for the NFL.


In making custom cards utilizing designs of the classic baseball and football cards of the past, I have found the easiest way to create my template is to scan an actual card from the desired set.


Generally a low-grade common card will do for that purpose. I often chose a card from the same team as the one I'm going to make, so I have correct team logos, color schemes, or whatever else might be a team variable in a particular set.


That's one of the advantages of living in the internet age, I can shop for an examplar card on eBay, or one of several sites that specialize in the selling "commons," and have what I need in a few days or a week.


I scan the card I use for my model at 300 dots-per-inch, and then spend a lot of time cleaning up the resulting image. Because vintage cards were printed in a four-color offset process, the registration between the colors on the finished card was not always perfect, so I use my PhotoShop Elements program to clean things up. While this can easily take several hours per card, for me it is an enjoyable part of the card-creation process. This is, after all, my hobby, and I want to be extra particular (anal, actually) in how the card will appear when all is said and done, it is my choice. 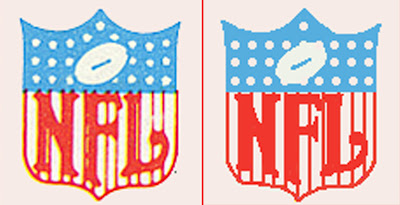 Here's an example of my clean-up efforts. The NFL logo shield at left is the way it appeared on the Jhonny Unitas card I scanned as my model. You can see the red and yellow ink are slightly off-register and the stars are fuzzy. By moving hundreds (thousands?) of individual pixels around I was able to create a much crisper image for my Piccolo card.