Daydreaming About an Autograph 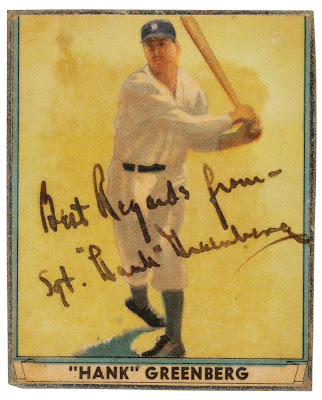 One of my favorite items in the June 18 Collect.Com Auctions debut sale was a baseball card signed with an unusual variant of Hall of Famer Hank Greenberg's autograph.
The card was a 1941 Play Ball that was signed in black fountain pen: Best Regards from -- Sgt. "Hank" Greenberg.
The card which hosts the signature would grade no better than Poor, since at one point in its history most of its borders were cut away, and some time later the card was laminated, likely to protect the signature.
It seems likely this autograph dates from Greenberg's first "hitch." After initially being classified as 4F by his local draft board -- unfit for military service because of flat feet -- he was re-examined and reclassified 1A after the public began to question the number of famous athletes who were receiving deferments based on supposed physical shortcomings.
Greenberg was inducted into the U.S. Army on May 7, 1941, and had reached the rank of sergeant when he was honorably discharged on Dec. 5, 1941, when Congress released all draftees who were age 28 or older. Two days later the Japanese bombed Pearl Harbor. Greenberg became one of the first major leaguers to volunteer for the armed forces.
He joined the U.S. Army Air Corps and went to Officers Candidate School, from which he was commissioned as a First Lieutenant. He served with a B-29 bomber unit in the China-India-Burma theater of operations until he was discharged in the summer of 1945.
Given that this card is signed "Sgt.," it was most likely autographed in the months between the spring issue of 1941 Play Ball and his discharge from the Army at that rank in December, 1941. For whom the card was signed, and under what circumstances, are lost to history.
In my imagination, I can see a fellow soldier stationed with Greenberg at Fort Custer, in Battle Creek, Mich., buying a piece of bubblegum at the PX and finding his famous sergeant's picture card inside the wax wrapper. Perhaps on a dare or a bet from other soldiers, or over beers at the NCO club, he approached Greenberg for an autograph and this card became a treasured souvenir carried throughout the war.
An experienced autograph dealer told me that Greenberg autographs noting his military rank are uncommon, but not unique. Still, it was of sufficient interest among collectors that it was one of the most heavily contested single cards in the Collect.Com Auction, finally changing hands at $274.
Posted by Bob Lemke at 12:24 PM