Maverick, Not Sports, but Collectible 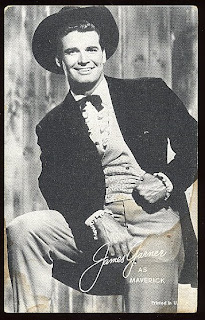 For the past year or more, the Starz Westerns channel on my dish has been re-running the old Maverick westerns of the late 1950s-early 1960s.

Maverick was easily my favorite TV western back then, though I'm not sure I could have told you why. Now, 50 years later, I can better express my appreciation. If the show wasn't the first TV western to take a lighter approach to its characters and storylines, it was the best at doing so.
While the episodes could be enjoyed by any child, Maverick was also an adult western; adult in the sense of sophisticated, understated humor, rather in the sense of nudity, crude language and gory violence.
It was only in this re-run incarnation that I became aware of just how far the show would go on occasion to poke fun at the competition and the genre itself. Two episodes that epitomize that willingness to push the envelope were parodies of contemporary westerns: Bonanza and Gunsmoke. In the latter, particularly, the characters were such close approximations of the Gunsmoke cast that until I had watched for several minutes I was convinced that they had kidnapped Milburn Stone (Doc) from the Gunsmoke set.
Something else I've noticed in watching the re-runs is that hardly an epiode goes by that Bret and/or Bart isn't cold-cocked from behind or otherwise slugged.
Another highlight of Maverick's Gunsmoke parody was actor Ben Gage as the take-off on Matt Dillon. Wearing the particular style of high-crowned cowboy hat that Dillon always sported, and with a voice and speech pattern that either naturally or intentionally mimiced James Arness, Gage was a hoot as the ersatz Marshall Dillon.
A search of the Internet Movie Database site revealed that Gage appeared in four episodes of Maverick, all as a sheriff or marshall. He also played a lawman in several other TV westerns. Perhaps not surprisingly, with his basso voice, Gage also got a lot of work in Hollywood musicals as the singing voice of more photogenic leading men like George Montgomery, Dana Andrews, Victor Mature and Cornel Wilde.
The Bonanza parody was good, but not as entertaining as the take on Gunsmoke (it was titled "Gun-Shy").
Far and away, my favorite Maverick was brother Bret, played by James Garner. I can tolerate those re-runs in which Jack Kelly (brother Bart) is the focus, but by the time characters such as cousin Beau and brother(?)/cousin(?) Brent were being featured, the show had jumped the shark. It was only recently I found out that Garner virtually disappeared from the series by 1962 due to a contract dispute with Warner Bros. All was forgiven by 1981-82 when he reprised the role in the "Bret Maverick" TV series and of course, his addition to the cast as Mel Gibson's "old pappy" in the 1994 movie was genius.
There was a time in the 1980s when I thought I might like to collect Maverick memorabilia. Like any good TV show of its era, Maverick had spawned tons of spin-off merchandise from Little Golden Books to board games and toy gun/holster sets, halloween masks, paint-by-numbers, etc. I did own a really nice Hartland Maverick figure in the Eighties, though I never did own the smaller standing "gunfighter" version. I gave up on my idea to collect Maverick memorabilia when it became apparent that they were dozens of toys to chase, along with magazine covers and other collectibles. And that was in the days before eBay.
Today, all I have left is a silver-dollar size aluminum "spinner" coin by Alcoa (one of the show's sponsors) that pictures Bret and Bart on one side and a box of aluminum foil on the other, and a Maverick Exhibit card. The Exhibit is part of a lengthy series of the black-and-white 3-1/4" x 5-3/8" penny arcade cards that featured western TV stars of the 1950s-1960s. I know there were at least poses of Bret Maverick. The card illustrated herewith is the best, or at least it's my favorite.
Posted by Bob Lemke at 12:35 PM