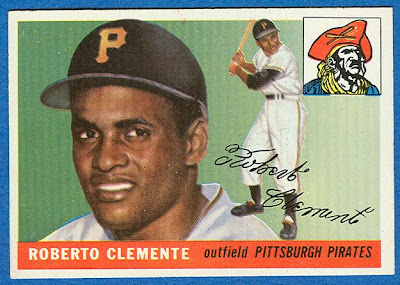 An extraordinary complete set of 1955 Topps baseball cards was sold on eBay in late April. If you looked at the cards' fronts in an album full of eight-pocket plastic pages you'd marvel at what appeared to be an EX-MT set of generally well-centered cards with unusually bright, glossy fronts.
If you didn't look carefully at the backs, however, you might miss the fact that a previous owner, perhaps as far back as 50+ years, had marked the year of issue on the back of more than 175 of the 206 cards in the set. Though 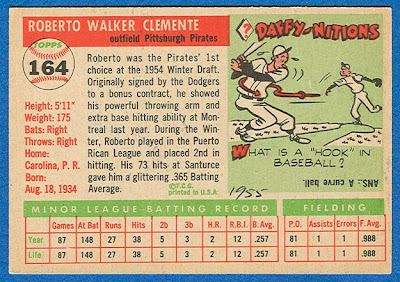 discreet, the marks were there. Some had the year "1955" inked on in ballpoint pen, others had been rubber-stamped in black with a "1956" date, but had the "6" overwritten in ink with a "5".
Most of the top stars and rookies in the set were thus disfigured . . . the Clemente, Koufax and Killebrew rookies, along with Jackie Robinson, Hank Aaron, Willie Mays and Ted Williams. A few of the stars, like Duke Snider, Gil Hodges, Jackie Jensen and the #1 card, Dusty Rhodes, had escaped the marking, along with 20 or so of the commons and minor stars.
I don't know specificially why the markings were applied, but I can guess, because I once did the same thing, though on a less comprehensive scale.
Unless you were a kid in the 1950s, or were a later student of Topps card backs, you might not realize that until 1957, when the bubblegum company started printing complete stats on back, there was nothing printed on Topps baseball cards specifically designating the year of issue. The stats boxes on back were labeled "Year" and "Life" and there was no copyright date. In the days before there were dealer price lists and reference books like the Standard Catalog of Baseball Cards with which the make visual identification, you had to read the backs of one or several cards of a particular design to get a clue as to when they were actually issued.
I recall doing exactly that at some point in the late 1950s, when I spread my shoebox of cards out on the kitchen table, sorted them by design, then pored over the backs until I came up with the year of issue. Rather than writing the year on the back of each card, I only wrote it on one card of each design. Too bad for me that for my stack of 1953 cards, my Willie Mays was on top and got a pencilled "1953" added to the back.
In today's condition-crazy hobby, childish things like extraneous writing, scrapbook remnants and penned team changes have a significant negative effect on card values. Surprisingly, however, the 1955 set with all the hand-dated cards didn't seem to suffer all that badly. According to the 2009 Standard Catalog, a complete set of 1955 Topps baseball is valued at $8,000 in Near Mint, $3,750 in Excellent and $2,250 in Very Good.
Looking over the seller's detailed descriptions of the '55 set, and the nearly 20 pages of pictures he provided of individual cards, it seems as if an EX-MT designation would be about right for the offered set. The seller had an ambitious "Buy It Now" price of $6,750 on the set, and ended up taking a $5,515 offer. That price is just about exactly what I would expect an unmarked 1955 set in that condition to bring these days.
I hope the buyer wasn't planning to try to remove the inked and stamped dates from the card backs. I contacted leading hobby card restoration expert Dick Towle (Gone With the Stain) about that possibility and he told me that on the porous cardboard stock on which baseball cards had been printed for most of their first century of existence, such ink additions are "almost impossible to get out." He said he would never even attempt such an undertaking.
While I enjoy a nicely preserved 1950s baseball card as much as the next hobby dinosaur, I'd be just as happy with a well-loved VG set at 40% of the price.
Posted by Bob Lemke at 12:41 PM