While I am certainly a technological dinosaur (virtually a luddite . . . feel free to google that) I have a real appreciation for what the proliferation of computers, scanning, the internet, forums, etc. has done for the process of compiling a baseball card collectors' catalog. 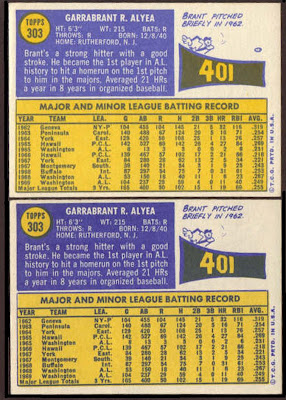 The lastest addition to the 1970 Topps checklist is a case in point. The illustrated variation on the back of card #303 Brant Alyea has obviously been around for nearly 40 years, but has only been made public in the last few months. On one variation, an elongated baseball in flight is pictured at the right end of the cartoon; on the recently discovered variation, the ball is absent.
Because one collector noticed the variety, and was able to post a query on a popular collectors' forum, other collectors were able to see the variation, check their own collections and confirm that it was not an erasure or an isolated printing error.
That qualifies it as a legitimate variation and insures that it will be listed in the 2011 edition of the Standard Catalog of Baseball Cards (the 2010 book is already is production), which in turn means the major authentication/grading services will begin slabbing the variation and suddenly hundreds or thousands of once-complete 1970 Topps master sets will now be missing a card. This in turn will set off a frantic search among 1970 "commons" for whichever version is needed.
Currently there is no word on which variation is the scarcer (if either is). It would seem logical that the "with ball" card was printed first, since the cartoon makes more sense with a baseball pictured, but what really matters and will ultimately determine values, is the relative scarcity between the two types.
Posted by Bob Lemke at 9:39 AM