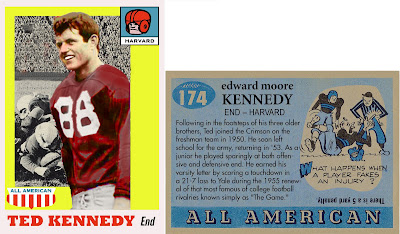 I would have posted this more timely in relation to the senator's death, but as I mentioned, I was on vacation and did not have access to my custom card creation archives to include the photo. I have the card front posted on my Photobucket pages (www.tinyurl.com/customcards)
but didn't have the back image on that site.


This 1955 Topps All-American style custom card of Ted Kennedy was one of the first dozen or so cards I created in my long-running "2nd Series" of college cards in one of my all-time favorite formats. The card was originally created more than six years ago, and was probably the first one on which I adopted the vertical layout, which was necessary to accomodate the tall, narrow photo.


I wasn't a fan of the senator's politics, but since I had already done cards of John F. Kennedy and Bobby Kennedy (and would eventually do one of Joe Kennedy, Jr.), I felt it was necessary to do a Ted Kennedy card to complete the "set."