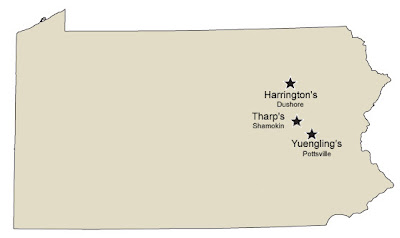 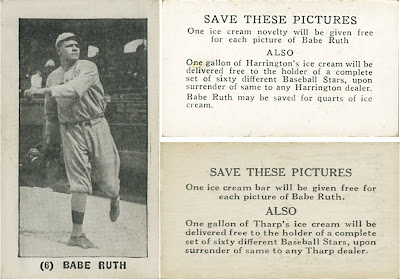 In the Standard Catalog Update #24 post on Sept. 15, we looked at a rare Harrington's Ice Cream card that is going across the Heritage auction block in a couple of days. We also took a broader look at several related ice cream prize-redemption baseball card issues of the day.

It was mentioned that the catalog introductions for those sets did not have information on where the issuing ice cream companies had been headquartered. Thanks to collector Dave Weisner, we now know.

I had known for some time that the Yuengling's Ice Cream card issue of 1928 was produced by the "U.S.A.'s oldest brewery" at Pottsville, Pa. (They still make a darn good lager.) In the midst of Prohibition, Yuengling's had, along with some of the nation's other breweries, found a way to keep the factory open until the ban on the production and sale of liquor was lifted. For some reason I had never added the location to the set's introduction, but will do so for the 2011 catalog.

Also to be added will be the fact that Harrington's Ice Cream was manufactured at a dairy in Dushore, Pa., while Tharp's Ice Cream was a product of Shamokin, Pa. These "finds" can be credited to Dave, who forwarded some internet sources confirming those locales.

Those unfamiliar with Eastern Pennsylvania geography may not realize that Shamokin, Dushore and Pottsville are no further than about 60 miles apart. It's also interesting to note that York Caramel Co., which in 1927 created the format that Tharp's, et al, copied the following year, is located in the same general area, about 50 miles southwest from Pottsville.