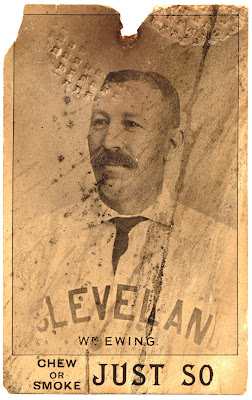 While it's only September, I think it would be a safe bet that the card pictured here will turn out to be the most important "find" of 2009. OK, the card was actually found in the 1990s, but it was only recently brought to the attention of the hobby.

Don't feel badly if you don't recognize the type, few collectors have ever seen one. The card of William (Buck) Ewing is from the 1893 Just So tobacco package insert set. Virtually unknown until the 1960s, the Just So cards feature only members of the Cleveland Spiders. These sepia portrait photos are printed on heavy, blank-back paper in a size of approximately 2-1/2" x 3-7/8".

Ewing becomes the 16th player on the set's checklist. Collectors had been divided for decades on whether a Just So Ewing had been issued. The Hall of Fame pitcher/outfielder had been traded to Cleveland from the N.Y. Gothams prior to the 1893 season for third baseman George S. Davis (himself a future Hall of Famer). That changed with the recent announcement by Rob Lifson, principal of REA Auctions, that the only known example of an 1893 Just So Wm. Ewing card has been consigned to his 2010 auction.

The card had been discovered years ago when Mike Gazo was remodeling the bathroom of his mother's home in Tamaqua (east-central), Pa. Behind a plaster-and-lath wall, the Ewing card was found fixed to a stud by a large square-headed nail. The front of the card bears the waffled imprint of a 19th century hammer and is speckled and streaked with coal dust and smoke as a result of its being located about a foot from the chimney of a coal stove for 100 years.

Ewing is the fourth Hall of Famer to have been included in the Just So Spiders team set, joining Jesse Burkett, John Clarkson and Cy Young. The only two "regulars" from the team yet to be found on a Just So card are third baseman Chippy McGarr and center fielder Jimmy McAleer. Almost all of the Just So cards, including all of the Hall of Famers, are known to have survived in only a single example. Knowledgeable 19th century collectors expect that even in its technically "Poor" condition, the Ewing card will bring a mid to high five-figure price when it crosses the REA auction block next spring.