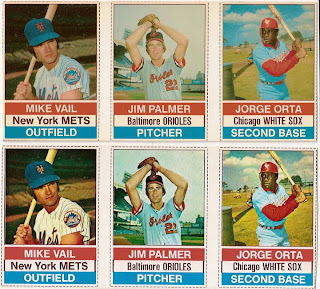 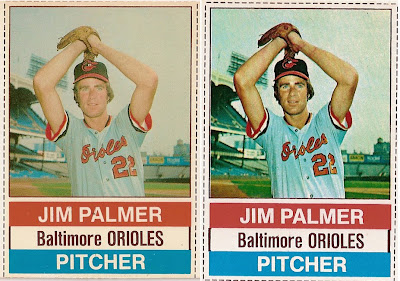 A real old-school hobbyist, Mike McCoy of Ohio was recently perusing the collection of 1976 Hostess box bottom panels that he put together when they were new. For the first time he noticed that the card of Jim Palmer, #56 in the set, had two distinct variations.
On one of his panels, the photo of Palmer shows two buttons below the Orioles script on the pticjer's jersey. Another panel shows three buttons. Not seeing the variation mentioned in the Standard Catalog, Mike e-mailed scans and asked if it was something that has remained unreported for more than 30 years.
While the catalog does note a handful of panels that appear to have been unissued proofs, with different players or major variations, there are no variations of this nature reported.
In making a close comparison of McCoy's panels, I've found that all three player pictures are cropped somewhat "lower" on one of the panels than the other. Besides adding a button to Palmer's uniform, the slight photo cropping difference allows the bottom of the "s" in Mets to show on Mike Vail's jersey, and reveals an extra fold in the left leg of Orta's pants.
My best guess is that these minor, yet distinct, differences, resulted from the panels -- more accurately, the complete snack product boxes on which they appear -- having been printed in more than one locations. We know that some brands of Hostess snack cakes were sold only regionally, or were known by different names (Ding Dongs = King Dons) in different parts of the country. It makes sense that rather than centrally printing the boxes and shipping them all over the country, that printing was undertaken on a more localized basis, accounting for the variation that Mike noticed.
It is entirely possible, likely even, that similar cropping differences can be found throughout the 1976 Hostess series of 150 cards. That being the case, we will not attempt to undertake a complete lisdting of them in the Standard Catalog, but will mention their existence in the set's introduction.
Posted by Bob Lemke at 1:18 PM