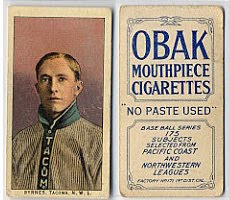 Back in the early 1980s I thought I'd combine my interests in minor league baseball and vintage baseball cards by assembling a collection of the Obak cigarette cards that were distributed on the West Coast in 1909, 1910 and 1911.I didn't realize it then, but those cards are so much rarer than most of the contemporary T206 cards from "Back East" that putting together complete sets of the Obak could take decades to accomplish -- and that's if a guy had more money than God to buy the cards when they became available.At about the time I started my Obak collection I also started researching the players who appeared in the sets. Over the course of several long Wisconsin winters I pored over microfilms of The Sporting News and The Sporting Life from the period several years before to several years after the Obak cards circulated, making prodigious notes on 3x5 file cards for each player in the set.I gave up trying to collect the T212s (that's the catalog number Jefferson Burdick assigned the three sets in the pioneering American Card Catalog in 1939), long ago, and have since sold off all my Obaks, one-by-one, first on eBay, then on the Net 54 baseball card forum. As I was selling each card, I included interesting tidbits about each player from my notes. The bidders seemed to like learning a little bit about these guys on the cards, so I thought I'd now begin sharing their stories here.
Jimmy (born James Joseph Byrnes in San Francisco in 1880) came to professional baseball in 1903 at the age of 23, getting in through the "back door," with the Oakland Reliance of the "outlaw" California State League, for which stats are unavilable. He jumped to the CSL's San Francisco team for 1904, then caught on in the "real" minor leagues with Oakland in the Pacific Coast League. He split catching duties on the Oaks in 1904-1905 with the aging veteran Pete Lohman.
Despite batting only .207 in those two seasons, he was picked up by Connie Mack's Philadelphia A's for 1906, where he rode the pines as a third-string catcher, getting into only nine games and hitting just .179. He may have had injury or personal problems that kept him off the diamond for most of the 1907-1908 seasons. He played in only 36 games with Portland and Oakland of the PCL in 1907. In 1908 he was back among the outlaws, catching for Sacramento of the California League, but appearing in only 67 games. He got into a spot of trouble during the season when he was fined $10 for throwing a bucket of water in an umpire's face.
He was in Sac'to again for the 1909 season, but this time with the PCL Sacts. He was traded to Oakland in September. The 1910 season found him with Tacoma in the Northwestern League, but he hit only .155 for the Tigers.
One source reported Byrnes in the Southwest Texas League in 1911, but the official record does not confirm that. He was a coach for the Santa Clara College baseball team in 1912 and sometime in that period did some umpiring.
He returned to the PCL as a player in 1913 with the Los Angeles Angels, hitting .190 at the age of 33. He managed the Modesto club in the California State League in 1914.
In November, 1914, he was elected to the California Assembly from San Francisco, and later went to work for the California state parole office, chasing down violators. He died in his home town in 1941.
Jimmy appears on two of the Obak sets, with Sacramento in the 1909 issue, and the illustrated 1910 card with Tacoma.
Posted by Bob Lemke at 3:00 PM