OT: I'm on vacation. Hey! Is that Robin Yount? 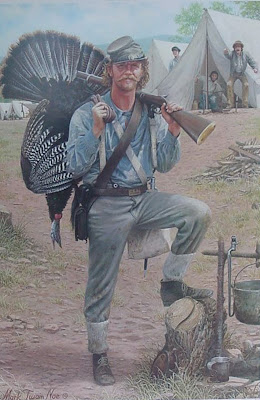 I've tried to schedule enough new posts to run while I am on vacation. I'll be back in action about Sept. 10, but I thought I'd knock out this off-topic ramble just to keep my hands in while the kids are at work.
The picture of the turkey-totin' Sesech is a print from a painting that was done by Mark Twain Noe (google him, he has a website). That print hung at the end of the hall of the "retirement" home we bought in Western Pa.
When I first saw it, I was struck by the resemblance of the rebel soldier to Robin Yount. The house's former owner took the print with him when we bought the place, but I couldn't get the picture out of my mind and how great it looked as a focal point at the end of the hallway.
In the summer of 2007 I was feeling pretty flush. I was a year into my new job and my retirement accounts were growing by the day. While sitting in the corner bar one Saturday afternoon, I got to talking with a friend of mine, wildlife artist Sharon Anderson. (Iola, Wis., is fortunate to have in residence two nationally famous wildlife artists in Sharon and in Jerry Gadamus. You can google Jerry, but Sharon's website is still under construction.) Iwas telling her about the Confederate turkey hunter painting when it struck me that I was in a position to have a painting of my own done.
We kicked around the idea and she drew some sketches on a napkin. I asked her how much an original painting would cost and before you know it, I had commissioned a portrait for my new house. 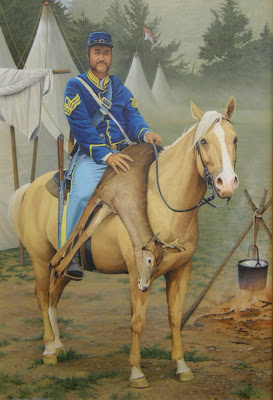 There's no doubt that I flat out stole the concept for my painting from Mark T. Noe. However, it fit some vague conceit of mine that if I had been a non-com back in Civil War days, I would have been a provider for my troops.
Since I was 10 years old when the Civil War Centennial came around in 1961, and have been fascinated with all things related to the war ever since (I had the big Marx Civil War playset, and collected the Topps Civil War News card set). In the early 1970s I became involved in Civil War shotting competitions. I've never been a re-enactor, but for a decade or so went out a couple of weekends a year and participated in target-shooting competitions with replica .36 caliber Navy revolver, a .50 caliber breech-loading Smith carbine, a .58 caliber Mississippi rifle and was even drafted a time or two for a cannon crew.
The personna I adopted for those evenst was a sergeant in Co. B, nd Wis. Volunteer Cavalry. That unit had been formed largely of men from my hom county of Fond du Lac, Wis., and had seen plenty of action in Tennessee, at Vicksburg and Texas.
The process of getting the painting done was a real education for me. Sharon works principally from photographs and, buy, did we ever take photos. The horse is my wife's "Sport." Since the painting was to be a surprise for my family when we visited our Pennsylvania home for Christmas, I had to make all the arrangements on the QT.
While my wife was out of town for a week, Sharon and her photographer friend came out to my place one afternoon and took about 200 pictures of Sport from every conceivable angle. With my wife out of town, I grew a beard (of course I started two or three week before she left), which I shaved in successive stages while close-up portrait photos were taken of my with a full beard, with the burnside as on the painting and with a moustache.
No, I never got on the horse to pose. I'm no longer agile enough for that. The artist borrowed my uniform and equipment and had a young man pose for a series of pictures on horseback. As a wildlife artist, Sharon was particularly keen to get the young buck right. She actually put a couple of local deer processors on notice of what she was looking for during the September archery season. When a hunter brought in the right specimen, she went over the butcher shop, draped the deer across a barrell and shot some photos.
Sharon did a lot of research in Civil War photo books to get the tents, horse trappings, etc., authentic. I think the end result was worth it all. During the process I occassionally fretted about spending that kind of money on a vanity item. However, as payments came due I always had enough in my baseball card account to pay for the painting without dipping into the family budget. I knew I had done the right thing the first time I came into the house after the portrait was hung and saw it down the hallway. I also got a feeling this was right for me one night when I was watching a Sopranos re-run and saw Tony commission a portrait of his race horse. When they said on TV what he was paying (at New Joisey prices a few years earlier), I felt pretty good about what I was getting for the money. We have a family heirloom that captures me at a time of my life that I recall with a lot of good memories.