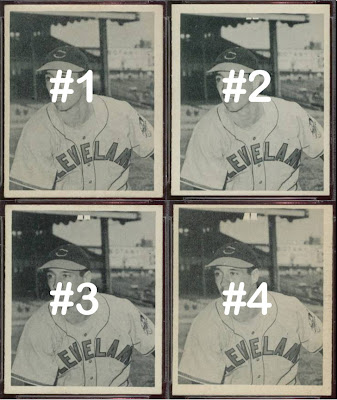 As I've said before, there are limitations to my ability to create/manipulate posts on this blog site. In trying to create this Update, I managed to delete the original Standard Catalog Update #23 post about the 1948 Bowman Bob Feller variations.

In response to that post, the guys (Jim and Levi) at 707 Sportscards sent me these photos and information. There's not a lot of commercially involved hobbyists who see more 1950s cards than 707, and little escapes their eagle eyes when it comes to variations. More importantly, they are generous with sharing their findings with the rest of us and have been regular and long-time contributors to my efforts in SCD and with the Standard Catalog of Baseball Cards for more than 20 years.


Their study of 1948 Bowman Bob Feller cards has led them to identify four major stages of the "boxes" variations that were the original subject of SC Update #23. Here's what they had to say about the variations . . .

"The variation on the 1948 Bowman Feller relates to 'windows' at the top center of the card. Most of the time when you see the card it has no white shapes, like card #1 above. Due to some sort of printing problem, the card can also be found with two white windows at the top. The windows also come in different sizes, as can be seen in the other cards shown, and this is probably due to the problem increasing in size gradually, as can be seen in cards #2 and #3, and then stopping at a point like card #4. A bunch of #4 types were printed and then the problem was likely discovered and corrected. Most of the cards found with the windows look like card #4. The quantity of #2s and #3s, and perhaps more in between varieties as well, appear to be found less frequently. A count of the 17 cards we surveyed shows: 12-#1, 1-#2, 1-#3 , and 3-#4 . The basic variation is pretty well known among advanced variation collectors, but few are probably aware that cards can be found in between."


Given that this is a case of "stages" of the variations, I'm not inclined to include it in the "big book," but the information is definitely worth preserving in this forum, where it will live forever in the cyber hobby.