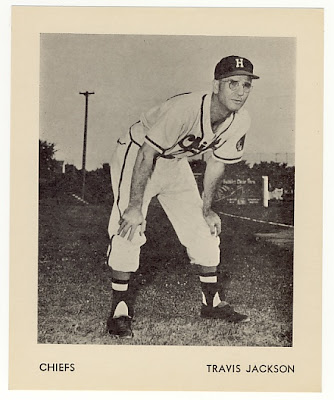 Any of you that followed my SCD column in the good old days may remember that I am a big fan of vintage minor league collectibles and of the Milwaukee Braves.

When a new discovery crosses my desk that combines those hobby interests I am in hog heaven.

Such is the case with a newly reported set of player pictures of the 1951 Hartford Chiefs, a Class A Eastern League farm club of the Boston Braves. The discovery was first posted on the http://www.net54baseball.com/ forum by Dave Bergin, who provided the scans and information you see here.

The black-and-white cards are in a 4-1/4" x 5-1/4" format, printed on card stock, blank backed. The pictures are likely a team-issued souvenir stand type item, but because Dave acquired them from the collection of a former typesetter for the Hartford Courant, it is possible the newspaper had some hand in printing and/or issuing them.

Dave has 17 cards from an as-yet unknown number that were originally issued.

Here's the list of cards currently known to exist:

Travis Jackson is a Hall of Fame shortstop who took over as Chiefs' manager after Tommy Holmes was called 100 miles up the road to take over the helm of the Boston Braves in mid-season.

Len Pearson was an aging (33) Negro Leagues (1937-50) slugger who was in his second season in Organized Baseball but who never got a chance to play in the Major Leagues.

Gene Conley had a 20-9 record with the Chiefs in 1951 on a 2.16 ERA. The Sporting News named him the Minor League Player of the Year (an award he also won two years later with the Toledo Mudhens) and was called up the Boston Braves in 1952.

Conley was one of six future Boston/Milwaukee Braves who played for the Chiefs in 1951. Besides Conley, the known checklist includes cards of Jack Daniels and Harry Hanebrink. Other future Braves whom you'll remember from your 1950s Topps cards who are not yet known to have been issued with this set are Ray Crone, Phil Paine and a 19-year-old Frank Torre.

Bergin's discovery set will be included in the vintage minor league section of the 2011 Standard Catalog. Naturally, if you can provide evidence of the existence of currently unknown cards from this set, please contact me via a comment on the blog or by e-mail at scbcguy@yahoo.com. Thanks much! 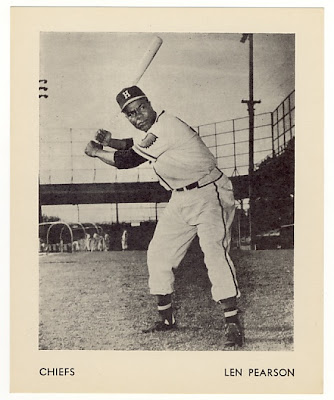