Back in the early 1980s I thought I'd combine my interests in minor league baseball and vintage baseball cards by assembling a collection of the Obak cigarette cards that were distributed on the West Coast in 1909, 1910 and 1911.I didn't realize it then, but those cards are so much rarer than most of the contemporary T206 cards from "Back East" that putting together complete sets of the Obak could take decades to accomplish -- and that's if a guy had more money than God to buy the cards when they became available.At about the time I started my Obak collection I also started researching the players who appeared in the sets. Over the course of several long Wisconsin winters I pored over microfilms of The Sporting News and The Sporting Life from the period several years before to several years after the Obak cards circulated, making prodigious notes on 3x5 file cards for each player in the set.I gave up trying to collect the T212s (that's the catalog number Jefferson Burdick assigned the three sets in the pioneering American Card Catalog in 1939), long ago, and have since sold off all my Obaks, one-by-one, first on eBay, then on the Net 54 baseball card forum. As I was selling each card, I included interesting tidbits about each player from my notes. The bidders seemed to like learning a little bit about these guys on the cards, so I thought I'd now begin sharing their stories here.
Did Bert Hall invent the forkball?
Bert Hall is one of many pitchers over the years who have laid claim to inventing the forkball, now more commonly known as the split-finger fastball. The back of Hall's 1911 Obak card (he also appears in the 1910 set) says Hall is "the only pitcher who has mastered the fork ball." The card also says that the pitcher's unusually long fingers allow him to produce the "oddest" curveballs.
Herbert E. (some sources give his middle name as Ernest, others as Earl) Hall was born in Portland, Ore., on Oct. 15, 1889. He turned pro in 1908 with the Tacoma Tigers of the Class B Northwestern League. From 1908 through July, 1911, Hall accumulated a 47-44 record. A sportswriter of the day said, "of all the pitchers in the Northwestern League, batters most fear Bert Hall. He was a 20-game winner in 1910 and had won 10 by July of 1911 when he was purchased by the Philadelphia Phillies.
In the closing months of 1911, Hall got one start and half a dozen relief appearances with the Phillies, earning an 0-1 record on a 4.00 ERA over 18 innings. That was extent of his major league career.
He returned to Tacoma in 1912, with a 6-10 record. He played for Vancouver in the NWL in 1913-14, winnnig 41 and losing 19. That earned him a jump up in class on the West Coast, and for 1915 he joined the Salt Lake City Bees of the Pacific Coast League. Over two seasons with the Bees he fought the Coast circuit to a 33-33 draw, and was sent back down to the NWL in 1917 for a final year of pro ball with Great Falls. He had an 11-7 record for the Electrics.
Hall retired to the plumber's trade and died in Seattle in 1948. 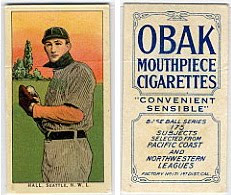 Clyde Hall . . . middle initial A or W?
Since so little is known about Clyde Hall, who appears only in the 1910 Obaks, I thought I'd combine his "tale" with that of Bert Hall.
Even the Society for American Baseball Research has no biographical information on Clyde Hall, or even whether he threw and batted lefty or righty. At least from his baseball card we can tell he was a right-handed pitcher.
SABR maintains two records for Clyde Halls; one has the middle initial of A, the other, W. From my notes I believe they are the same player and that A was the correct initial.
Clyde Hall first appears as a professional ballplayer with Class B Cedar Rapids in 1906, though his record for 14 appearance is unrecorded. It must have been reasonably proficient, however, as he spent the next two seasons with Omaha of the Class A Western League.
Hall reportedly held out from Omaha most of 1909, then joined Seattle for 1909-10. His record in those seasons is, again, incomplete, but it is recorded that he was 13-4 in 1909.
He drops out of sight after 1910, resurfacing in 1913 with the Boise "Irrigators" of the Class D Western Tri-State League, where he was 6-6.
And that is about all we know about the confident-looking young pitcher portrayed on a 100-year-old baseball card.