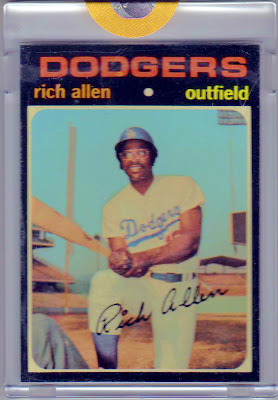 Some strange and wonderful things have emerged from the Topps Vault since much of the contents of the gum company's card archives began to be offered in eBay auctions some years back.
For various reasons, not all of the goodies are "catalogable" (there's that word again). One grouping that does seem worthy of inclusion in the Standard Catalog of Baseball Cards, however, is what appears to be an early Topps trial of high-gloss coating on card fronts.
According to Buffao, N.Y., collector Mike Chauby, who brought these cards to our attention, the experiment was probably not a success because the cards in his possession show signs that the glossy coating was either applied unevenly or dried unevenly. This resulted in streaks, pock marks and other imperfections on the surface. As well, the cards' showed a proclivity to scratches on the glossy surface.
What is especially interesting in the Topps experiment is that they chose to try the glossy coating on high-number 1971 baseball cards. While it is impossible to know when the experiment was conducted, it is not unreasonable to presume it was contemporaneously with the issue of the high-number '71s, when a sheet of the cards would have been at hand. Topps did not release a true high-gloss finish card until its 1984 Tiffany baseball set.
Beginning on June 16, 2008, and continuing throughout July of that year, Topps offered a handful of the glossy '71 high numbers every couple of days in its eBay auctions. Each card was sealed in a thick plastic slab and each card had a Topps hologram attached to a back corner, guaranteeing authenticity. Some purists might decry the placing of a sticker directly onto the card back, rather than on the holder, but in reality, it would not be at all difficult to fake these cards by applying a glossy coat to the front of "regular" '71T high numbers.
Each of the test cards is known in only one example, but it is not known how many of the 108 cards in Topps' 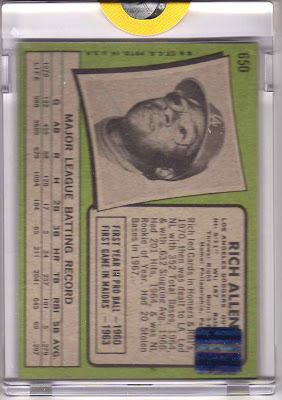 Sixth Series of 1971 (#644-752) were involved in the experiment. The gloss coat may have been applied to a full sheet of 132 cards (in which case there would be two examples of some), or it may have been done working with a half-sheet of 66 cards. It is known that some of surviving test cards are among the series' short-prints.
Classifying these glossy '71T high numbers is problematic. They are not really a test issue in the sense that term is usually applied. Test issues were usually released for public sale in limited quantities and markets. They are also not strictly speaking proof cards because they are completely printed, front and back. The hobby has never really embraced the term experimental issue, but that probably comes closest to an accurate description of these 1/1 rarities.
Chauby had maintained records for more than a dozen of the glossy cards when they were originally sold on eBay. Winning bids ranged from $9.99, which would have been the minimum bid, to more than $30 for the Expos team card and Rich Allen, toa high of $66.65 for Jose Martinez. The average of 17 cards for which Chauby recorded prices was $20.04. Unfortunately, if the Hall of Famers and other high-demand cards in the Sixth Series were ever offered, their selling prices are not recorded. These would include Sparky Anderson, Boog Powell, the Dusty Baker-Don Baylor rookie card, and Luis Aparicio. Given their 1-of-1 status, those 2008 prices seem cheap and can likely be attributed to the fact that these cards were previously unknown and uncataloged within the hobby.
Posted by Bob Lemke at 9:41 AM