Even more on Indians' picture packs 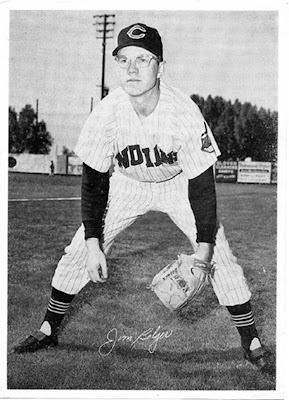 This forum has been blessed with quite a bit of new information on Cleveland Indians picture packs in recent months. Most will eventually find its way into the Standard Catalog of Baseball Cards. The trend continues with the first checklisting of a 1959 photo pack.
This (probably partial) picture pack was offered on eBay on Aug. 5, when the beat-up envelope and 19 player pictures -- each described as exhibiting some light discoloration -- sold for $36.51. The envelope is a bit misleading in that it shows Chief Wahoo presenting drawings of portrait photos when, in reality, the individual pictures all seem to be posed action shots.
I'd like to have included a photo of one of the pictures in this presentation, but the seller did not respond to my request for a scan. (What's up with that? Doesn't he know who I am?) UPDATE: Thanks to reader Bob Wong, we now have a photo of one of the picture from the 1959 issue. Jim Bolger only played eight games for the Tribe, having come to Cleveland from the Cubs in a pre-season trade and being traded to the Phillies on June 6, 1959.
The pictures are in the usual Indians' photo pack format of white-bordered, blank-backed photos with a facsimile autograph for identification. If the seller was accurate in his description, these 1959 pictures were a bit longer, at 9-1/4", than normal for the genre, but in the same 6-1/2" width.
The checklist here shows only 19 players and manager Joe Gordon, so it is likely incomplete. Indians' pix packs of the era typically contained 24-30 or more pictures. 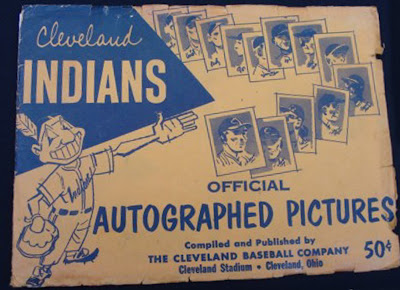